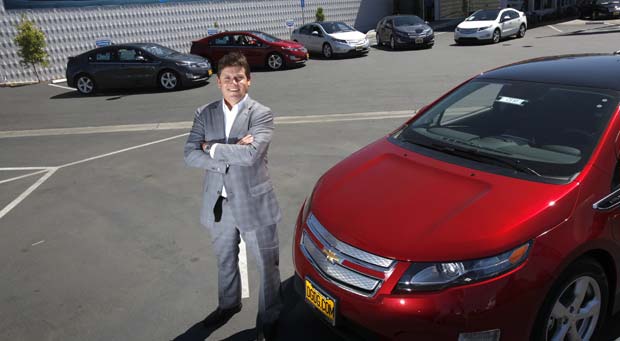 The Chevrolet Volt is winning new customers to the brand from the competition with the Toyota Prius topping the list of most traded-in vehicle followed by the Toyota Camry, Honda Civic and BMW 3 Series.

About 70 percent of Volt buyers are trading in non-GM cars, and in a recent survey, Volt owners expressed their passion for the vehicle with 93 percent stating that they would buy the car again.

“Nearly seven in 10 Volt buyers are new to Chevrolet,” said Volt marketing manager Cristi Landy.  “With new customers coming to the brand because of the Volt, our dealers have a great opportunity to establish lasting relationships and introduce them to our entire Chevrolet product line up.”

“I owned a Prius for six years and loved it. I was one of the first to sign-up for the plug-in (version),” said Steve Glenn of Santa Monica, Calif. “While I was waiting for it to ship, I learned that the Volt would qualify for the HOV stickers, so I did a test drive. I fell in love then. It’s faster, better appointed and gets far better gas mileage than the Prius (or the plug-in). I’ve driven it over 1,000 miles and I’ve only used five gallons of gas.”