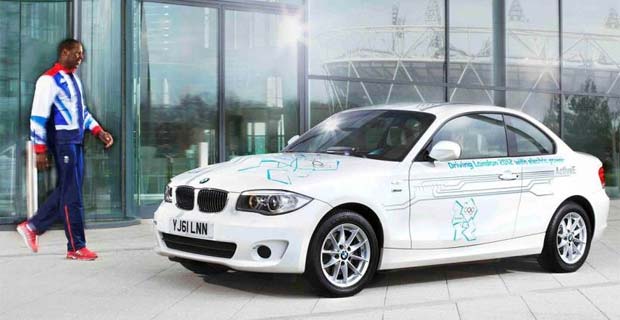 BMW has unveiled its fleet of electric and hybrid cars, motorcycles and bicycles for the London 2012 Olympic and Paralympic Games, which will play a crucial role in delivering what is promised to be the first “truly sustainable Games”.

BMW will have 240 electric and hybrid cars at the London Olympics this summer as part of the fleet of 4,000 vehicles the German automaker is supplying to the Games.

As Official Automotive Partner to the London 2012 Olympic and Paralympic Games, BMW is bringing 160 units of the 1 Series ActiveE small family car and 40 of the even smaller Mini E, with another 40 units of the 5 Series Active Hybrid.

When they need to charge up, the electric BMWs will showcase London’s new charging infrastructure – 120 new high speed charge points installed in five key locations such as at ExCeL London.

The fleet will be on call for a wide range of duties during the Games, which open on July 27 and conclude on August 12.

The BMW and MINI fleet surpasses the target with average CO2 emissions of 116 grams CO2 per kilometer or 64.5 mpg.

The BMW electric vehicles and hybrids will be the first medium-sized cars on UK roads that meet the 2014 EU6 emissions regulations. As of September 2014, EU6 will be the mandatory emission limit for all new cars. EU6 brings down diesel nitrogen oxide emissions to petrol car level.

At the London Games, 80 percent of the BMW fleet will fulfil EU6 emission standards two years before they become mandatory.