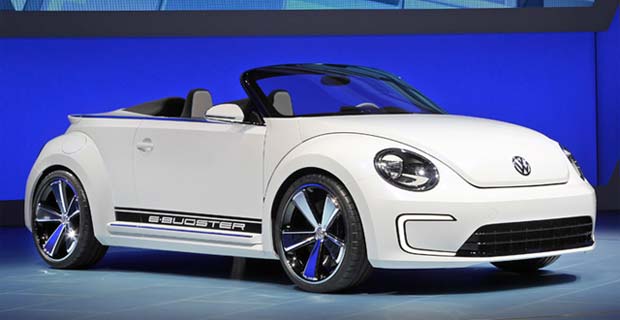 Volkswagen has released the first details and images of the new E-Bugster concept car that is due to be showcased at Beijing Auto Show next week.

The central electric module of the E-Bugster has an innovative design; it weighs just 80 kg. The energy for powering the electric motor is stored in a lithium-ion battery whose modules are housed in a space-saving location behind the front seats.

The battery’s energy capacity of 28.3 kWh enables a range of at least 180 km (112 miles) in the urban world. And even in an enormous country like China, for the majority of commuters this is sufficient to drive to their workplaces and return home.

Since the Volkswagen has a quick charging function, the battery can be ‘refuelled’ within 35 minutes at suitable charging stations. At home, the battery of the E-Bugster can also be charged from a conventional electric outlet. The interface for the charge cable is located behind the normal ‘fuel door’ near the C-pillar.

Thanks to a new Combined Charging System, the E-Bugster can be ‘filled up’ flexibly via one interface using any available charging modalities. Possible are: single-phase charging with AC current and ultra-fast DC charging at charging stations (quick charge).

The E-Bugster is a Beetle that could hardly be made to look more dynamic. Actually, it is a sports car. It has a height of less than 1,400 mm, which is about 90 mm less than that of the hard top Beetle. And the production model already looks really powerful with its sharply sculpted proportions. The E-Bugster’s width (1,838 mm) grew by 30 mm, while its length (4,278) remained the same as that of the production car.

In front, it is the swept-back and wide windscreen that catches the eye; its glass extends laterally to a point above the A-pillars. The E-Bugster, which is equipped with LED headlights, is also distinguished by the highly customized bumpers of the production Beetle: designers integrated the daytime running lights to the left and right of the central air intake as bands of LED lights in a C-shape (naturally mirrored on the right side). Ever since the e-up! concept car was presented in Europe, this form of daytime running light has been a feature on Volkswagen electric vehicle studies. These styling elements also appear in modified form as reflectors in the rear bumper, which was also redesigned. The rear windscreen of the E-Bugster proves that the rear windows of a speedster do not need to restrict visibility like the arrow slits in castle walls: it is extremely wide.

A speedster needs swept-back windows and a low roof, and the E-Bugster has them. First, let us survey the car’s profile. The wheels beneath the flared wheel housings are 20-inch versions of the 18-inch Beetle ‘Twister’ wheels, equipped with 235/35 R 20 tyres. From the side sill, the viewer’s gaze moves upwards over the large, smooth continuous surface of the door and the contour line above the door handle that looks as though it were carved with a knife. Just a few centimetres above this point, the Beetle becomes a speedster: designers lengthened the chrome strip of the lower window border towards the rear; it now runs (as it did on the New Beetle Cabriolet) once around the car, from A-pillar to A-pillar. The hard top of the ‘Bug’ extends in a low arc above this chrome line. Following the roof radius – in classic speedster style – is the upper border of the side windows. The height between the chrome lower window border and the uppermost roof line is a low 400 mm. And that is how it should be for a speedster!

The combination of high-tech equipment and dynamic performance is also reflected in the interior. Sport seats and a continuous centre tunnel in body colour underscore the sportiness of the E-Bugster. The use of aluminium as the material for the door handles and belt guides, and the lightweight construction styling of the steering wheel also produce a direct connection between the exterior and interior. Starting the E-Bugster is a unique experience: the Start button not only activates the drive system; it also puts a light show into motion: first, the interior is immersed in a white light, then a blue light. It begins as a light pulse in the instrument cluster; from there the light emanates as a thin line of light, just one millimetre wide, coursing into the door window sills and around the air nozzles – a kind of visual awakening of the E-Bugster.

The name is derived from the American nickname for the Beetle, ‘Bug’ and the ‘speedster’ body style and is considered to be a pre-production preview of the new Beetle Convertible.[wzslider height=”400″ lightbox=”true”]