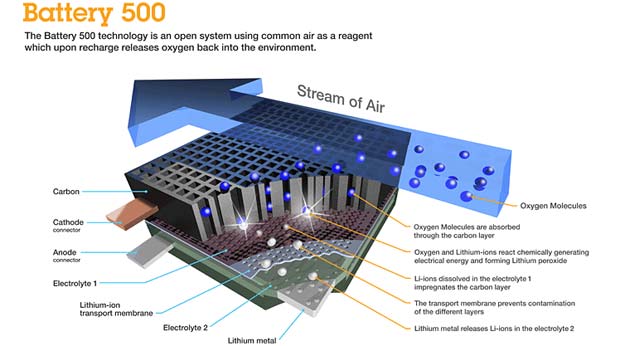 IBM announced that two industry leaders — Asahi Kasei and Central Glass — will join its Battery 500 Project team and collaborate on far-reaching research with the potential to accelerate the switch from gasoline to electricity as the primary power source for electric cars.

As partners in the Battery 500 Project, Asahi Kasei and Central Glass bring decades of materials innovation for the automotive industry to the team. They will expand the project’s scope and, although the scientific and engineering challenges to its practical implementation are extremely high, exploring several chemistries simultaneously increases the chance of success.

· Asahi Kasei, one of Japan’s leading chemical manufactures and a leading global supplier of separator membrane for lithium-ion batteries, will use its experience in innovative membrane technology to create a critical component for lithium-air batteries.
· Central Glass, a leading global electrolyte manufacturer for lithium-ion batteries, will use its chemical expertise in this field to create a new class of electrolytes and high-performance additives specifically designed to improve lithium-air batteries.

“These new partners share our vision of electric cars being critical components of building a cleaner, better world, which is far less dependent on oil,” said Dr. Winfried Wilcke, IBM’s Principle Investigator who initiated the Battery 500 Project. “Their compatible experience, knowledge and commitment to bold innovation in electric car battery technology can help us transfer this research from the lab onto the road.”

IBM started the Battery 500 project in 2009 to develop a new type of lithium-air EV batteries that are capable of traveling 500 miles before needing to recharge. The idea is to make EV adoption more widespread by offering greener cars capable of matching the range of gasoline cars.

Today, most electric cars can drive about 100 miles before needing to recharge their lithium-ion batteries. This is an issue, since gasoline cars are capable of going four to five times that range on a single tank. One option could be a larger battery, but that would weigh down the car considerably.

Instead, IBM has been working on an alternative: lithium-air batteries. Lithium-air batteries have a higher energy density than lithium-ion batteries, mainly because of their primary fuel being oxygen from the atmosphere and the fact that they have lighter cathodes.

Today, IBM researchers have successfully demonstrated the fundamental chemistry of the charge-and-recharge process for lithium-air batteries.

How it works: During discharge (driving), oxygen from the air reacts with lithium ions, forming lithium peroxide on a carbon matrix. Upon recharge, the oxygen is given back to the atmosphere and the lithium goes back onto the anode.