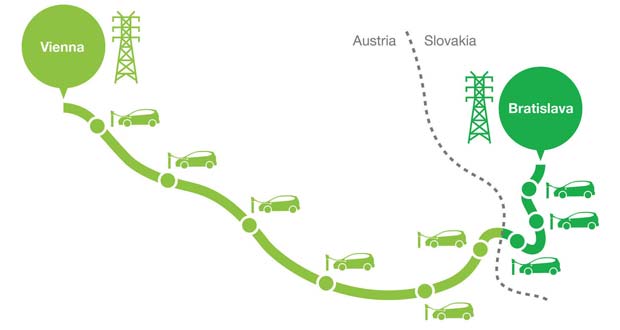 IBM has partnered with Zapadoslovenska energetika (ZSE), the largest distributor and supplier of electricity in Slovakia, for a feasibility study which aims to help the capital city of Bratislava get ready for plug-in electric vehicles.

The companies are studying the best way to develop a “green highway” between Bratislava and the neighboring Austrian city of Vienna, which is about 49 miles away.

This highway will interconnect the two cities with a network of public charging stations for electric vehicles that can support a new generation of electric cars without stressing the existing power grid.

This study is part of a larger pilot project – VIBRATe’ (VIenna BRATislava E-mobility), a first of its kind in Central Europe, with a goal to reduce emissions with a smarter, energy efficient transportation system.

Currently, the average combustion engine produces about 45 kg of CO2 per year during the route from Vienna to Bratislava.

“The aim of the feasibility study is to identify new opportunities around e-mobility in Bratislava and maximize the market potential, in an effort to reduce emissions,” said ZSE. “By analyzing the capacity needed from the distribution network for various types of vehicle charging / recharging, Bratislava can not only implement an optimal power grid, but also address the charging concerns shared by its citizens.”

ZSE is spearheading this project to identify alternative energy resources, drive consumer engagement and ensure the reliable distribution of electricity. Once implemented, the solution will help consumers save energy and control usage costs, while helping utilities manage power load on the energy grid during peak charging times with better insight into consumption. Additionally, energy suppliers will have the ability to store energy for use when natural sources of energy are not available.