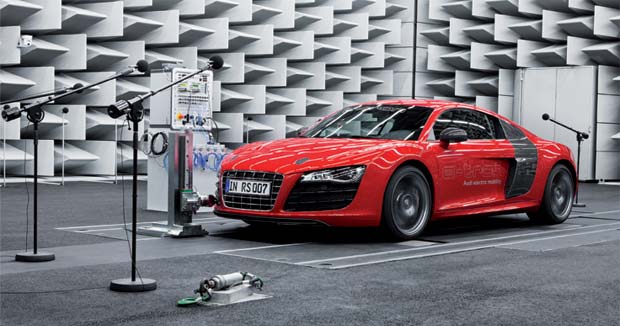 Audi has developed e-sound for its R8 e-tron electric car, saving absent-minded pedestrians from an unfortunate encounter with this battery-powered road rocket.

In a series-production Audi, a combustion engine currently supplies the music. The motor in an electric-powered e-tron is not an option, as it is too quiet and its high frequencies are not exactly melodious. Audi’s e-tron models will therefore feature a synthetic sound signature. Rudolf Halbmeir teamed up with his colleagues Axel Brombach and Dr. Lars Hinrichsen to create it.

The new sound – which will be fitted to all Audi e-tron EVs – isn’t a single monotone but created on the fly, depending on the speed of the motors, the overall vehicle speed, the current load and more.

The e-sound itself will be played via a loudspeaker attached the vehicle’s undercarriage.

“We designed it to handle as much as 40 watts, but during normal operation it ranges between five and eight watts. That’s loud enough for nearby pedestrians and cyclists to hear the e-tron.”

Audi says while the e-sound for future Audi e-tron electric vehicles will sound similar, each will have a signature note. The sound of the high-performance R8 e-tron, for instance, goes from a purr to a growl when the throttle is tapped.[wzslider height=”400″ lightbox=”true”]