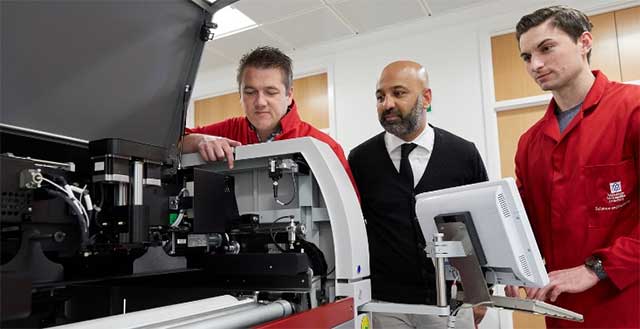 Creating a renewable and sustainable source of energy from hydrogen that is also affordable could be unlocked with a university’s innovative use of screen-printed nanotechnology.

Researchers at Manchester Metropolitan University will test a way to provide a green source of power that could be harnessed by remote communities who are off the electricity grid and reliant on imported diesel and petrol for generators.

The idea is to be able to print large volumes of inexpensive electrodes for use in electrolysers, a device that breaks water into its component oxygen and hydrogen. The hydrogen can then be stored or transported and fed when needed into fuel cells to create electricity on demand as a more dependable and efficient source of fuel than solar, wind, wave and tidal energy.

It builds on previous Manchester Metropolitan University proof-of-concept work into finding an alternate way of manufacturing electrodes that are traditionally reliant on components made out of expensive platinum and iridium, metal elements whose cost prohibits cheap reproduction.

The screen-printing technique, which will take place at the University’s new £4 million Manchester Fuel Cell Innovation Centre, would enable the electrodes to be printed in novel shapes and styles, as well as allowing them to be mass produced for industrial applications.

Manchester Metropolitan University’s prototype electrodes will be fitted into a stack of water electrolysis cells that will then be ‘harsh weather tested’ on Scotland’s Orkney archipelago.

Difficult to balance energy generation with demand
Research Associate Dr Samuel Rowley-Neale said: “The electricity generated by wind, wave, tidal and solar power is often ill correlated to consumer demand and typically has to be fed into the National Grid where it is used instantly or must be expensively captured somehow, such as in a battery – which has issues with degradation – or else the turbines have to be shut off to ensure the generated electricity does not overload the electricity grid.

“That means it is difficult to balance the electricity being generated to the level of demand. In contrast, an electrolyser creates hydrogen that can be easily stored and physically transported as a gas with no deterioration, and then later fed into a fuel cell for conversion to power when needed. And unlike the burning of fossil fuels, the only by-product is oxygen and some water that are harmless to the environment.”