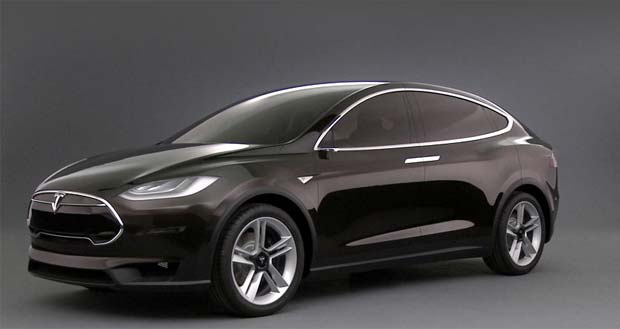 Palo Alto based EV manufacturer Tesla Motors, has today unveiled its Model X electric crossover at its own design studio in Los Angeles.

Based on the same vehicle platform as the Tesla Model S electric sedan, the TVP (Tesla Vehicle Platform), the Model X shares about 60 percent of its content with the Model S and weighs about 10 percent more.

As a result, Elon Musk, the chief executive of the Tesla Motors, said the Model X would squeeze roughly 10 percent less range from its battery packs.

The Model X would be offered with a choice of two packs, rated at 60 and 85 kilowatt-hours. For comparison, the Model S has a range of 160 miles extendable to 230 or 300 miles with a battery pack upgrade – options that will also be available for the Model X.

The Model X will be available in both rear- and four-wheel-drive versions, with the latter reportedly able to accelerate from 0 – 60 mph (96.5 km/h) in around 4.4 seconds courtesy of two independent electric motors – one on the rear axle and the other in the “engine bay.”

The Model X — whose falcon-wing doors recall a design made famous by the DeLorean sports car in 1985’s “Back to the Future” — will compete with Toyota’s electric RAV4, a crossover SUV that will sport Tesla’s electric-drive technology.

Mr. Musk said the Model X would enter production in late 2013 and begin delivery in 2014. Pricing should be close to Model S territory, he added.