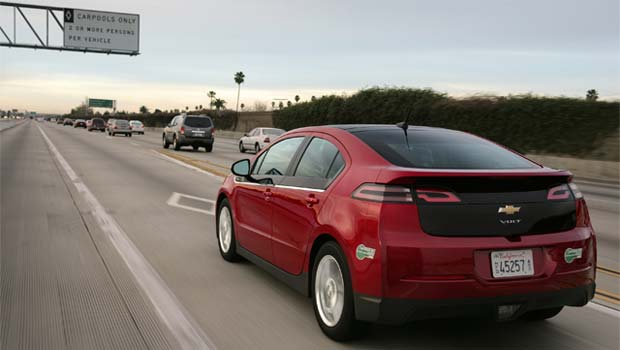 General Motors has announced that a new low-emissions version of its 2012 Chevrolet Volt electric car has been cleared to use California’s 1,400 miles of carpool lanes.

General Motors began shipping the first of its low-emission Chevrolet Volt to California, where buyers will get an extra $1,500 rebate and be allowed to drive alone in the state’s carpool lanes.

Commuters who use carpool lanes in Southern California save an estimated average 36 minutes a day, or about a third of their total driving time.

The California Department of Motor Vehicles is making 40,000 Clean Air Stickers available for registered vehicles that meet the state’s emissions standards. Applications can be downloaded from the DMV’s web site at www.dmv.ca.gov.

Additionally, the new Low Emissions Package makes the 2012 Volt eligible for owners and lessees to receive up to $1,500 in state rebates through the Clean Vehicle Rebate Project. This incentive is in addition to a federal tax credit of up to $7,500.

California has more than 1,400 miles of High Occupancy Vehicle lanes. Originally restricted to vehicles with two or more occupants to help minimize congestion, the lanes are now open to   single occupancy use by owners of advanced, low-emission vehicles.

The Chevrolet Volt has a total driving range of up to 379 miles, based on EPA estimates. For the first 35 miles, the Volt can drive gas-and tailpipe-emissions-free using a full charge of electricity stored in its 16-kWh lithium-ion battery. When the Volt’s battery runs low, a gas powered engine/generator seamlessly operates to extend the driving range another 344 miles on a full tank.