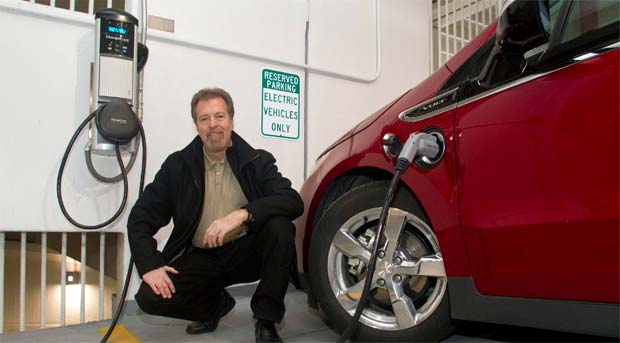 Chevrolet recently surveyed Volt owners and found they fill up, on average, once a month, travelling more than 900 miles between gas station visits.

The EPA fuel economy label for the Chevrolet Volt indicates owners can expect to save approximately $7,600 on fuel over five years compared to the average new vehicle, assuming the Volt is driven 15,000 miles yearly.

Volt owners have travelled more than 10 million miles, with roughly two-thirds of those miles powered by grid electricity since the vehicle launched late last year.

The Volt has a total driving range of up to 379 miles, based on EPA estimates. For the first 35 miles, the Volt can drive gas- and tailpipe-emissions-free using a full charge of electricity stored in its 16-kWh lithium-ion battery. When the Volt’s battery runs low, a gas-powered engine/generator seamlessly operates to extend the driving range another 344 miles on a full tank.

Jay Leno has driven his Chevrolet Volt to and from his job as host of “The Tonight Show” daily since taking delivery of his Volt in December. To date, he has traveled more than 10,000 miles using only grid energy and is still on the same tank of gas that was in the car when he brought it home from Rydell Chevrolet in Northridge.

“I like electricity when I need it and gas when I need to use it,” said Leno. “I travel 28 miles to the studio every day, then I go shopping, run errands, pull in the driveway; that’s 40 miles or so, then I plug it in, but if I need to travel further the car is ready for that too.”

Edward Ellyatt of Fort Myers, Fla., is another Volt owner who has traveled more than 10,000 EV miles in his Volt. Ellyatt doesn’t use a drop of gas during his 41 mile daily commute and he regularly makes use of available public charging.

“I’m an opportunistic charger. I charge anywhere I can to extend my electric driving range,” said Ellyatt. “I generally find a 120V plug in the parking lot and ask management if I can use it when shopping or dining. If I am at one location for an hour or two I can expect to get enough EV range to get me home where I can plug back in.”

Leno and Ellyatt are among a growing number of five-figure odometer Volt drivers set to receive a “10,000 Electric Mile” badge for their vehicle in recognition of their achievement.