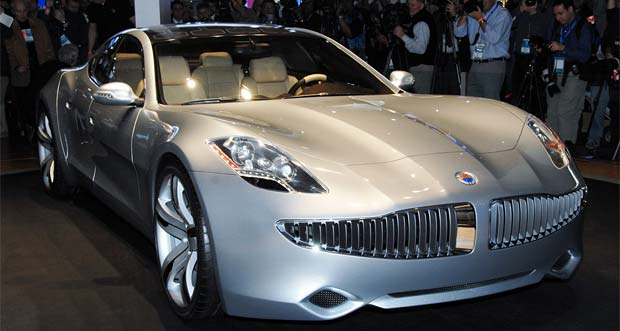 The EPA has finally tested the $96,895 Fisker Karma plug-in hybrid luxury sedan and the results are: 52 MPGe (miles per gallon equivalent) and 32 miles of an all-electric range.

These figures are worse than Fisker’s original claim of 50 miles. Once its batteries are depleted, the Fisker Karma kicks into range-extender mode where the GM-supplied 2.0-liter range-extending gasoline engine acts as a generator and is used to top up the batteries. The real shocker is that in this mode, the fuel economy drops to 20 MPG, about the same as a Ford Explorer.

To put that figure in perspective, a Karma driver with a 40-mile commute who starts each day with a full battery charge will only need to visit the gas station about every 1,000 miles and would use just 9 gallons of gasoline per month, according to Fisker.

The Karma battery can be recharged in less than six hours using the same 240v household current that powers many major home appliances. The Karma can also be charged using standard 110v power from any electrical outlet.

In pure electric mode the Karma’s electric motors generate 235 hp, but when the 22.6 kWh battery pack is charged and the gasoline engine is running the combined output rises to 403 hp, increasing performance to a level more in line with the type of conventional luxury sedans customers will be cross shopping against it. A solar panel on the roof is said to generate enough electricity to add up to 5 miles per week of range.