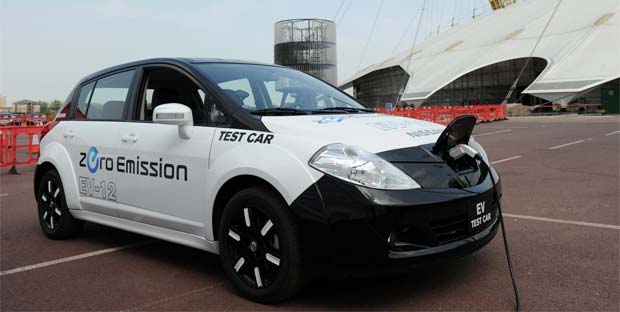 In the television program, presenters Jeremy Clarkson and James May drove a pair of electric vehicles, including the Nissan LEAF, into the centre of Lincoln in an attempt to find somewhere to charge their cars.

Having failed to find any public infrastructure the pair were forced to charge at the University in the centre of the city, dangling cables through an open window.

Should the presenters choose to attempt the journey again in future, they will discover a newly-installed PodPoint charging unit dedicated to them. With two sockets, it would allow both Jeremy and James to recharge their batteries at the same time.

Charging will be free of charge to electric vehicle owners.

The PodPoint charging unit is due to be installed before the end of the month and the presenters will be invited to return to Lincoln and be the first to plug in to the new charger.

Top Gear Executive Producer Andy Wilman said: “This is excellent news for the electric car community of Lincoln. If the charging point had existed when Top Gear were there, James wouldn’t now be walking around with Jeremy’s name tattooed on his bottom. Still, better late than never.”

Before announcing this decision, Nissan has had a bit of a feud with Top Gear regarding the film. They said TG’s verdict was biased against electric cars and they made Nissan LEAF look like a useless vehicle and Top Gear producer Andy Wilman, responded to the charges.[wzslider height=”400″ lightbox=”true”]