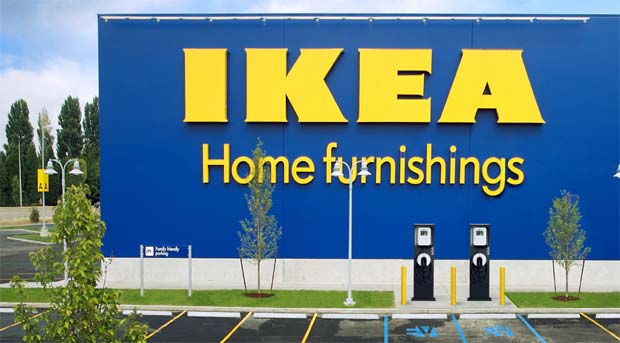 IKEA has teamed up with ECOtality to install Blink electric vehicle charging stations at select IKEA stores in the Western United States.

IKEA locations being considered for hosting the charging stations include 10 stores in Arizona, California, Oregon, and Washington.

The project is targeting to have everything in place by the end of 2012, although the first of the charging points could very well be up and running later this year.

The Swedish home furniture giant will be responsible for preparing sites for installation, keeping them orderly and reporting charging information to ECOtality, who will oversee installation and manage ongoing charger operations.

IKEA has 320 stores in 38 countries, 37 of which are located in the U.S. This project forms part of a wider commitment to a green energy portfolio that includes eight solar installations already in place, with another 12 currently in development, and a new store in Colorado that uses a geothermal energy system.

ECOtality is the project manager of The EV Project, a public-private partnership funded in part by a federal stimulus grant from the U.S. Department of Energy made possible by the American Recovery and Reinvestment Act (ARRA) to provide the necessary infrastructure to support the deployment of EVs. ECOtality is overseeing the installation of approximately 14,000 commercial and residential charging stations in 18 cities and major metropolitan areas in six states and the District of Columbia. IKEA stores are in four of those states.