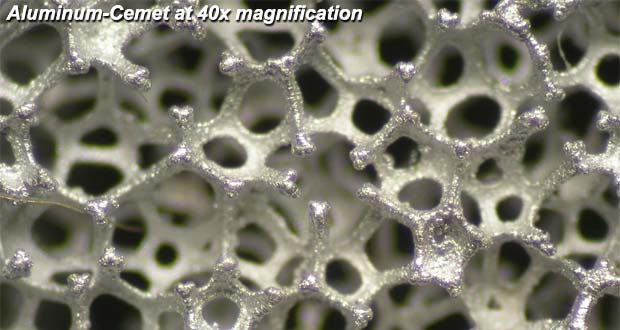 What gives Aluminum-Celmet its ability to be the basis of highly efficient batteries is its extreme porosity – up to 98 percent. When used as a replacement for the aluminum foil anode in a secondary – rechargeable – lithium-ion battery, that porosity allows for the battery to contain a significantly larger amount of the lithium compound that contributes its ions to the electrical flow.

Replacing the aluminum foil with Aluminum-Celmet increases the amount of positive active material per unit area. Sumitomo Electric’s trial calculations indicate that in the case of automotive onboard battery packs, such replacement can triple the capacity of lithium-ion batteries. Alternatively, with no change in capacity, battery volume can be reduced to one-third to two-thirds. These changes afford such benefits as reduced footprint of home-use storage batteries for power generated by solar and other natural sources, as well as by fuel cells.

Sumitomo Electric has already used nickel-based Celmet to create nickel-metal hydride and nickel-cadmium battery cells. The new Aluminum-Celmet material, however, has the advantages of being lighter and having improved electric conductivity and corrosion resistance, properties that make it suitable for secondary lithium-ion batteries.

The company has setup a production factory at Osaka to accelerate the development of the material and to produce the battery-boosting material.