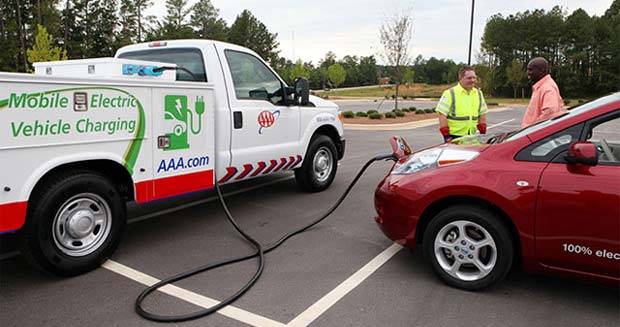 AAA will provide 10 to 15 minutes of charge time to members with discharged electric cars, which will allow the vehicle to drive three to 15 miles to a charging station where they can further charge their vehicle.

The mobile chargers will be Level 2 (240-volt) and Level 3 (480-volt) chargers, which means they operate faster than a normal household outlet.

AAA said it will initially deploy trucks with mobile electric car charging capability in six metropolitan areas across the U.S. as a pilot program. Those areas include Portland Ore., Seattle, the San Francisco Bay area, Los Angeles, Knoxville, Tenn. and the Tampa Bay area. The phased rollout will begin later this summer and continue into the fall.

The AAA Roadside Assistance truck unveiled at Plug-In 2011 is powered by Green Charge Networks. It featured a removable lithium-ion battery pack for mobile charging. Other cars will be equipped with generators powered by alternative fuels and other power sources.

There are three charging levels for electric cars:

• Level 1 is a standard 120-volt household outlet, which would take roughly 20 hours to fully charge a Nissan Leaf.
• Level 2 is 240 volts AC (alternating current). This is commonly found in household electric clothes dryers and can charge a Nissan Leaf in approximately six hours.
• Level 3 is DC (direct current) charging at high voltage—up to 500 volts DC. This allows a large amount of energy to be delivered to an electric car in a very short period of time. A “depleted” Nissan Leaf could go to 80 percent state-of-charge in roughly 30 minutes with Level 3 charging.