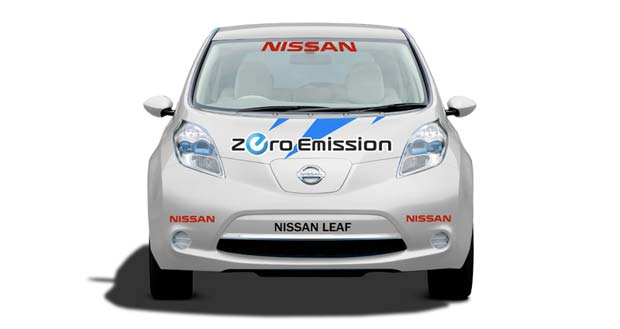 The Nissan LEAF will compete in the Production Class for electric vehicles and, other than the removal of some interior parts like seats and carpets to make room for safety equipment, such as a roll cage, racing seats and safety harnesses, the LEAF will be very close to the way it left the factory.

Like every production Nissan LEAF, the Pikes Peak LEAF will be powered by a lithium-ion battery composed of 48 compact modules and a high-response 80kW AC synchronous motor that generates 107 horsepower and 207 lb-ft of torque. However, unlike most of the other vehicles competing at Pikes Peak, the LEAF will have no tailpipe, no emission of greenhouse gases and will make the climb in near silence.

The LEAF’s entry in the 89th Pikes Peak International Hill Climb marks the motorsport debut of the vehicle that, aside from the removal of a few interior parts to make way for safety equipment, will be very similar to the LEAFs that roll off the production line.

In related news, Nissan said will demonstrate the Nissan LEAF NISMO RC at LE MANS VERS LE FUTUR, a support event for the 79th running of the 24 Hours of Le Mans, which takes place June 11-12.

Two demonstration runs by the Nissan LEAF NISMO RC are scheduled: – the first at 21:15 on Thursday, June 9th and the second at 12:10 on Saturday, June 11th local time.

The 24 Hours of Le Mans is the world’s most renowned endurance race and is held on the Circuit de la Sarthe, near the town of Le Mans, 200 kilometers west of Paris. It is considered the toughest endurance event in the world and for many car manufacturers, doing battle at Le Mans is considered a badge of honor.

This year Nissan/NISMO-powered LMP2 cars will participate in the race. Lucas Ordonez, winner of the first GT Academy, will drive the Signatech Nissan, one of the LMP2 cars.