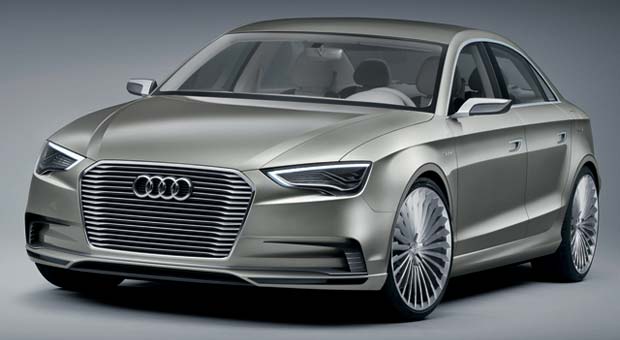 Audi has unveiled its latest e-tron concept, the Audi A3 e-tron, at the Shanghai Auto Show this week.

Carrying over much of the earlier A3 Sedan concept’s styling, the new A3 e-tron continues Audi’s plug-in vehicle line-up that started with the Audi e-tron unveiled at 2009 Frankfurt Show, than the smaller e-tron concept in Detroit last year, the R8 e-tron and the e-tron Spyder, and continued with the A1 e-tron.

Designed as a plug-in hybrid, the A3 e-tron concept is propelled by two power units – a 155-kW (211-hp) 1.4 TFSI four-cylinder engine with turbocharging and gasoline direct injection and an electric motor with an output of 20 kW (27 hp).

The system provides a combined output of 175 kW (238 hp). Working together, the gasoline engine and electric motor accelerate the notchback to 100 km/h (62.14 mph) in 6.8 seconds, then on to 231 km/h (143.54 mph). A regulated oil pump, the intelligent Audi thermal management system, a start-stop system and an energy recovery system – technologies from the brand’s modular efficiency platform – all contribute to this high efficiency.

At the heart of the A3 e-tron concept are the lithium-ion batteries located behind the rear seats. With a charge capacity of 12 kWh, they give the notchback a range of up to 54 km (34 miles) on electric power alone.

The batteries are charged by the standard energy recovery system when the car is in motion or directly from a household power socket when it is parked. This means that in most cases, the car is entirely emission-free in city driving.

A compact seven-speed S tronic serves as the transmission for the compact plug-in hybrid. It comprises two transmission structures, which are operated by two clutches. Gears are alternately shifted by the two clutches – at lightning speed, comfortably, and without any perceptible interruption of traction.

The design represents the typical Audi language of sporty elegance.

No word on when the A3 e-tron will hit the streets or how much it will be priced.[wzslider height=”400″ lightbox=”true”]