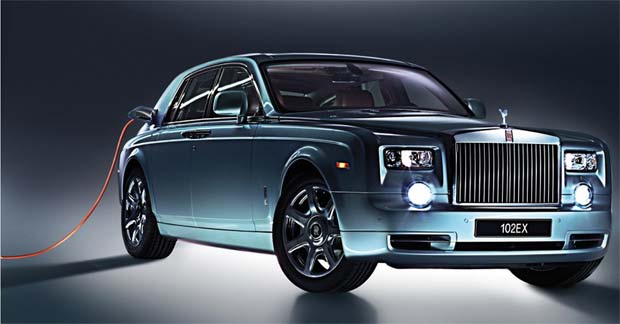 Rolls-Royce is unveiling this ‘experimental’ electric version of its Phantom luxury sedan at the 2011 Geneva Motor Show.

The electric Phantom, known as either the 102EX or Phantom Experimental Electric (EE), represents the company’s intention to carefully get opinions and reactions to alternative drive-train options from a range of people including owners, enthusiasts, members of the public and the media.

Phantom EE is thought to have the largest passenger car battery in the world. Peak current is 850A, delivered at 338V DC. Overall capacity is 71kWh.

The pack is comprised of large-format NCM pouch cells. NCM (Lithium-Nickel-Cobalt-Manganese-Oxide) is a variant of lithium-ion chemistry that has particularly high energy and power densities.

The Phantom EE battery pack houses five modules of cells, a 38-cell module, a 36-cell module, and three smaller ones of ten, eight and four arranged in various orientations within an irregular shaped unit. This resembles the overall shape of the original engine and gearbox.

Each of the 96 cells was individually tested before assembly into modules to determine their characteristics and capacity. Sub-assemblies were further tested under load to verify that the power connections between each cell perform to specification.

The electronic sensing units for each group of cells were tested and calibrated prior to assembly and put through a rigorous temperature cycling regime designed to provoke failure of weak components. The main electronic box, which contains the switching and control gear, was tested in isolation from the other components to verify correct operation.

Three separate charger units (3kW each) are fitted to the battery, which allow both single-phase (20 hours) or three-phase charging (8 hours); for a passenger car this is unique. A fourth induction charger is also fitted to enable wireless charging, a technology being trialled in Phantom EE.

Rolls says the battery will offer a range of around 125 miles and that it should last for three years if used on a daily basis.

Concerns about lack of available re-charging infrastructure in towns and cities are well documented and critics of electric motoring point to the additional inconvenience of trailing cables connected between power source and vehicles.

To present Rolls-Royce owners with a vision of a potential solution to these problems, Phantom EE is testing a technology called induction charging. This allows re-charging to take place without any physical connection, delivering greater convenience for owners and hinting at the potential for a network of remote charging facilities.

There are two main elements to induction charging; a transfer pad on the ground that delivers power from a mains source and an induction pad mounted under the car, beneath Phantom EE’s battery pack. Power frequencies are magnetically coupled across these power transfer pads.

The system is around 90 percent efficient when measured from mains supply to battery and it is tolerant to parking misalignment. For example, it is not essential to align the transmitter and Phantom receiver pads exactly for charging to take place. While pads are capable of transmitting power over gaps of up to 400mm, for Phantom EE the separation is in the region of 150mm.

The coupling circuits are tuned through the addi­tion of compensation capacitors. Pick-up coils in the receiver pad are magnetically coupled to the primary coil. Power transfer is achieved by tuning the pick-up coil to the operating frequency of the primary coil with a series or parallel capacitor.

The pick-up controller is an essential part of the technology because it takes power from the receiver pad and provides a controlled output to batteries. It is required to provide an output that remains independent of the load and the separation between pads. Without a controller, the voltage would rise as the gap decreases and fall as the load current increases.

The transmitter pad has been constructed to shield magnetic fields to prevent EMI egress to bystanders and the system operates well within internationally agreed limits.

The brand confirmed that the vehicle will be used as a “test bed” throughout the year. This consists of a tour through North American, European, Middle Eastern and Asian markets, where current Rolls-Royce owners will be offered test drives of the 102EX.[wzslider height=”400″ lightbox=”true”]