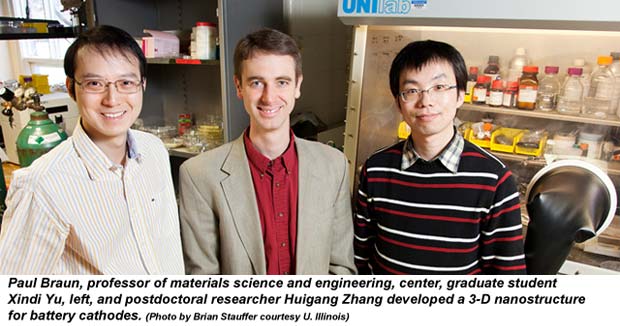 Paul Braun and his colleagues at the University of Illinois have succeeded in building new battery technology that allows electric vehicles to recharge in minutes, not hours.

The batteries in Illinois professor Paul Braun’s lab look like any others, but they pack a surprise inside.

The newly cathode allows extremely fast charging and discharging to the tune of 400C for lithium-ion and 1,000C for NiMH batteries in which, ”C” is the charge (or discharge) rate where 1C equals a charge in one hour. 400C means a full charge in 1/400 of an hour. This means normal lithium-ion batteries could be recharged to 90 percent in just two minutes.

The performance of typical lithium-ion (Li-ion) or nickel metal hydride (NiMH) rechargeable batteries degrades significantly when they are rapidly charged or discharged. Making the active material in the battery a thin film allows for very fast charging and discharging, but reduces the capacity to nearly zero because the active material lacks volume to store energy.

Braun’s group wraps a thin film into three-dimensional structure, achieving both high active volume (high capacity) and large current. They have demonstrated battery electrodes that can charge or discharge in a few seconds, 10 to 100 times faster than equivalent bulk electrodes, yet can perform normally in existing devices.

This kind of performance could lead to phones that charge in seconds or laptops that charge in minutes, as well as high-power lasers and defibrillators that don’t need time to power up before or between pulses.

Braun is particularly optimistic for the batteries’ potential in electric vehicles. Battery life and recharging time are major limitations of electric vehicles. Long-distance road trips can be their own form of start-and-stop driving if the battery only lasts for 100 miles and then requires an hour to recharge.

The group published its results in the March 20 online edition of Nature Nanotechnology.