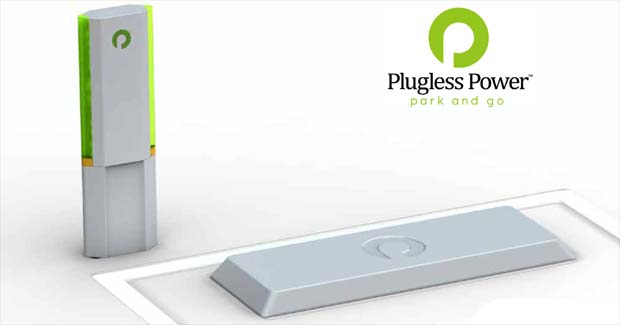 Plugless Power is based on inductive technology, which has been used in electrical transformers for more than 100 years, and streamlines the charging of electric cars and extended-range hybrids by eliminating the nuisance of the cord and the plug.

Using inductive technology, Plugless has managed to harness the electrical power produced by the station and send it all, wirelessly, into the surrounding air, charging in the process the plug-in hybrids and the electric vehicles that happen to be in the vicinity.

Evatran is actively seeking other fleet trial opportunities with corporations and municipalities to experience the Plugless Power technology in the third quarter of 2011.

Most EV models are eligible for Plugless Power through a simple retrofit process. In addition to fleet distribution, Evatran is currently working with automotive manufacturers to integrate the Plugless Power technology into mass-market EVs by 2012.

Google has multiple low-speed electric vehicles for short-range travel around its campus and includes plug-in vehicles in its on-campus employee car-sharing program. The company will initially use the Plugless Power station to charge a retrofitted short-range electric vehicle. Google showed interest in testing the Plugless Power technology and understanding how its features could simplify the charging process for its plug-in EV fleet vehicles.