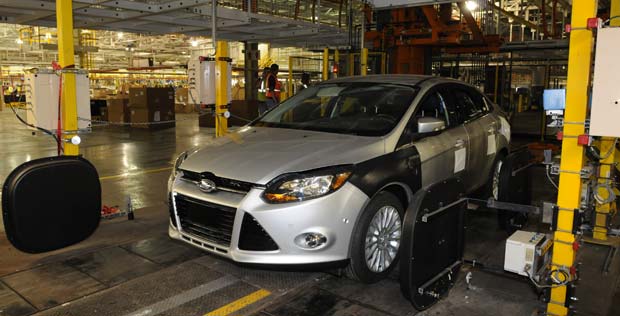 Ford announced plans to build three hybrid, plug-in hybrid and electric vehicles at its Michigan Assembly plant in Wayne, as well as a gasoline engine version of the new Ford Focus.

That will make the retooled Michigan Assembly Plant the only factory in the world to build vehicles with four different powertrains on the same assembly line.

After a 13-month, $550 million conversion from making large SUVs, the Wayne plant has started producing a conventional gasoline-powered 2012 Ford Focus that will go on sale in early 2011. Three electric versions of the Focus will follow: a battery electric model in late 2011 and hybrid and plug-in hybrids in late 2012.

“We’ve modernized just about every square foot of this facility to establish a new standard for a high-tech, green, flexible and efficient auto factory,” said Jim Tetreault, Ford vice president of North America Manufacturing. “The transformation of Michigan Assembly Plant stands as a symbol for the transformation of Ford.”

On the outside, a new 500-kilowatt solar panel system will be installed to help generate renewal energy for production of Ford’s all-new Focus and Focus Electric cars.

Ten new electric vehicle charging stations on the property will be used to recharge the electric trucks that transport parts between adjacent facilities.

Inside, new cars making the three-mile trip down the assembly line must pass dozens of rigorous quality inspections. A new three-wet paint booth utilizes 66 paint robots with seven axis of movement to precisely apply paint to the cars. In the body shop, 500 new robots capable of 4,000 welds per vehicle add to the plant’s flexibility. And a new internal communications system flashes updates and information to the plant’s 3,200 employees via 163 monitor screens distributed throughout the plant.