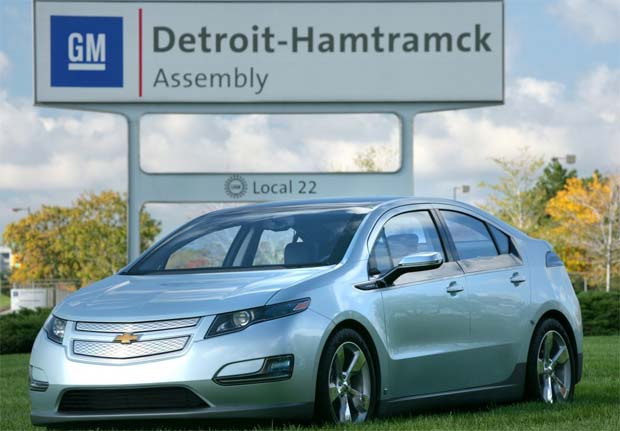 General Motors assembled the first Chevy Volt at its Detroit-Hamtramck plant, and the Obama administration has pledged to buy the first 100.

President Obama announced today that the Federal Government will lead by example in replacing older cars in the federal fleet with fuel efficient hybrids and plug-in hybrid electric vehicles, reducing our dependence on foreign oil as well as cutting carbon dioxide and other pollution.

The U.S. General Services Administration will double the federal hybrid fleet this year and has committed to purchasing approximately 100 plug-in hybrid vehicles in 2011. These steps are part of a broad effort to implement the Executive Order signed by President Obama in October which calls on agencies to cut the federal government’s fleet petroleum use by 30 percent by 2020, among other goals.

The resulting improvement in fleet fuel efficiency will reduce petroleum consumption by the equivalent of an estimated 7.7 million gallons of gas, or 385,000 barrels of oil.

The Department of Energy is helping lead the way on this initiative by replacing 753 vehicles with hybrids this year. This brings the total number of hybrid vehicles at the Department to 888, even as the Department begins to reduce the overall size of its vehicle fleet.