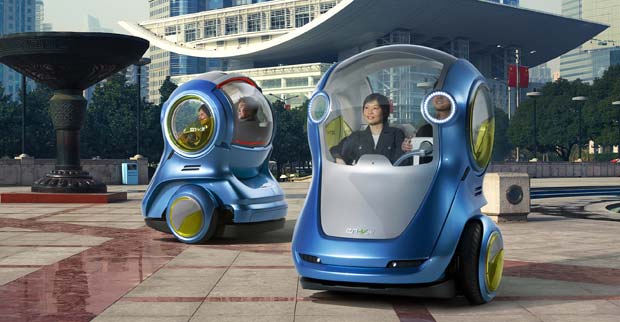 General Motors and its Chinese partner SAIC will unveil the EN-V two-seat electric concept vehicle in May at the World Expo in Shanghai.

By 2030, GM said, more than 60% of the world’s 8 billion people are expected to live in urban areas, putting even greater pressure on already struggling public infrastructures, such as roads. 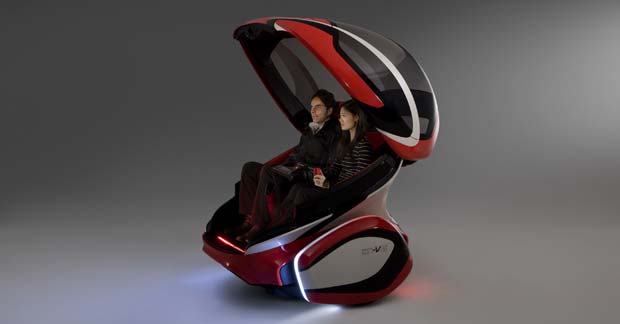 GM has built 12 prototypes of three versions of the EN-V concept vehicle each is based on the same mechanical platform.

EN-V’s platform has evolved from the platform of the Personal Urban Mobility and Accessibility (P.U.M.A.) prototype that was developed by Segway and debuted in April 2009.  Segway has worked collaboratively with GM to develop and deliver multiple copies of the drivetrain platform that seamlessly connect to and power the various EN-Vs.

EN-V is propelled by electric motors in each of its two driving-mode wheels.  Dynamic stabilization technology empowers EN-V, giving it the unique ability to carry two passengers and light cargo in a footprint that’s about a third of a traditional vehicle.  It can literally “turn on a dime” within its own operating envelope.  In addition, everything in EN-V is drive-by-wire, supporting its ability to operate autonomously or under manual control. The motors not only provide power for acceleration, but also bring the vehicle to a stop.

The EN-V has a top speed of about 25 miles per hour and a range of 25 miles, are powered by small lithium-ion batteries.

The EN-V seats two occupants side by side and has a wheel at both ends of the lateral center line of the car. Each wheel is powered by a 3kW electric motor drawing power from a battery of lithium ion cells.

EN-V can also improve the efficiency of the public electric infrastructure since the vehicle can communicate with the electric grid to determine the best time to recharge based on overall usage.

By combining the Global Positioning System (GPS) with vehicle-to-vehicle communications and distance-sensing technologies, the EN-V concept can be driven both manually and autonomously.

Its autonomous operating capability offers the promise of reducing traffic congestion by allowing EN-V to automatically select the fastest route based on real-time traffic information.  The concept also leverages wireless communications to enable a “social network” that can be used by drivers and occupants to communicate with friends or business associates while on the go.

This combination of sensing technology, wireless communication and GPS-based navigation establishes a technology foundation, pieces of which could migrate from the EN-V concept and potentially lead the way to future advanced vehicle safety systems.

The ability to communicate with other vehicles and with the infrastructure could dramatically reduce the number of vehicle accidents.  Using vehicle-based sensor and camera systems, EN-V can “sense” what’s around it, allowing the vehicle to react quickly to obstacles or changes in driving conditions. For example, if a pedestrian steps out in front of the vehicle, EN-V will decelerate to a slower and safer speed and stop sooner than today’s vehicles.

An EN-V could cost one-fifth to one-sixth the price of a conventional car and cost a third or a fourth of what it takes to operate a normal vehicle, according to GM.[wzslider height=”400″ lightbox=”true”]