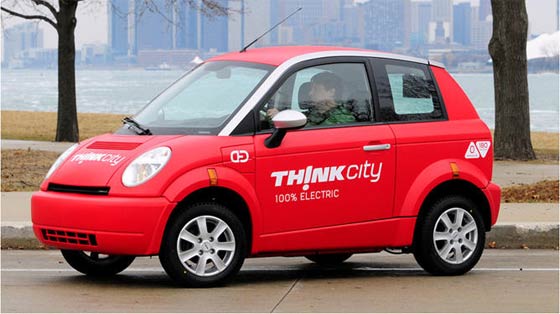 The THINK City is an electric car that demands very little of you. In fact, not much more than a mobile phone.

Just an overnight power top-up, and it’s ready to go in the morning.

THINK City is a modern urban car. With zero local emissions and an energy efficiency three times that of a traditional combustion engine car, it is a car for the environment. And it is a fun car for you.

A choice of sodium or lithium batteries allows you to accommodate your car to your driving style, travelling up to 180 kilometers (112 miles) in one charge, with a top speed of 100km/h (62 mph).

The THINK City is a safe vehicle to drive both in cities and on highways, as proven by its conformance with the CE-marking criteria and EU homologation requirements (M1 certificate) – in fact, it is the first EV ever to be awarded a pan-European homologation certificate.

To become the first EV ever to achieve these exacting standards, the THINK City has been put through extensive testing and validation, including hundreds of computer simulations and correlations, over 50 sled tests and more than 20 real crash tests.

Comprehensive electrical testing and validation has also been conducted over extended periods, including 30cm deep water wading and total submergence in salt water with all electrical systems activated.