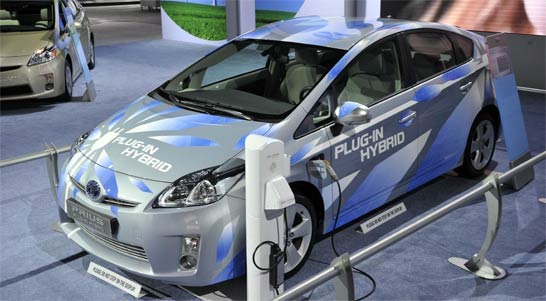 Seven-Eleven Japan Co. added four plug-in hybrid cars to its corporate fleet in Kyoto on Thursday, with plans to provide them for store supervisors to use on their rounds.

The Seven & i Holdings Co. convenience store unit also plans to acquire six more Toyota Prius Plug-in Hybrids from Toyota and to use two each in Saitama and Aichi prefectures as well as in Tokyo.

Seven-Eleven Japan has installed a 200-volt charging facility at a store to open Friday in Kyoto. Along with using it for its own plug-in hybrids, the store will let shoppers recharge their plug-in hybrids and electric vehicles free of charge for up to 30 minutes.

Among convenience store chain operators, Circle K Sunkus Co. is also planning to boost its corporate-use Prius Plug-in Hybrids to 10 by spring after having introduced one last month.

Toyota aims to sell “several tens of thousands” of plug-ins a year globally. Approximately 600 Prius Plug-In Hybrid units will be introduced in Japan, the United States, and Europe over the first half of 2010, for use by governments and businesses.