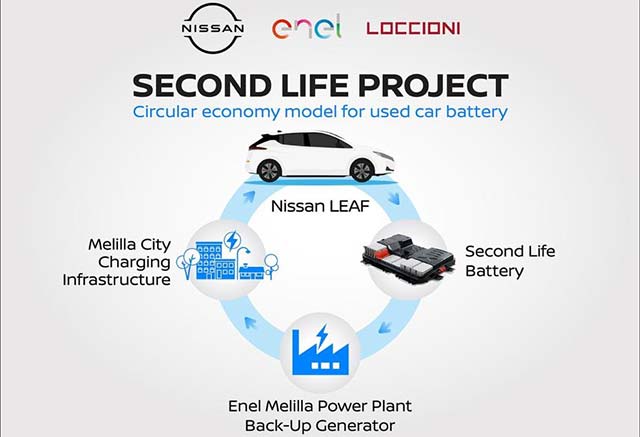 A pioneering initiative in Europe, the project is based on circular economy principles, and has been selected as a “member initiative” by the World Economic Forum (WEF). The Second Life project has already received major recognition in 2020 through the BASF – Sustainability Excellence Club (Club de Excelencia En Sostenibilidad) award in the category of Best Circular Economy Practice among large businesses. The award recognises the best Circular Economy practices in Spain, rewarding projects that address the challenges of limited natural resources through a variety of circular business models.

As part of the collaboration, Nissan has provided the batteries from its electric vehicles and Loccioni, a system integrator, secured the proper integration between batteries needed for the circular process. The project leverages advanced technology based on a simple idea: once the useful life of a battery within an electric vehicle has come to an end, these batteries are recycled and assembled in a large stationary storage system. This system is integrated with Endesa’s Melilla facility to avoid the interruption of electricity supply during events of excessive load, to improve the reliability of the grid and secure the continuity of network service to the local population. The back-up generator is composed of 48 used Nissan LEAF batteries and 30 new ones.

Melilla has a population of almost 90,000 inhabitants served by a local electricity network, which is powered by Endesa’s plant and isolated from the national distribution grid.

Soufiane Elkhomri, Director of Energy Services for the Nissan AMIEO region (Africa, Middle-East, India, Europe and Oceania), explains: “At Nissan we believe the future is electrified. Through partnerships, we can make the future smarter and more efficient. The collaboration with Enel allowed us to create a model for a battery’s second life, which can be applied in many other use cases. This is a great example of the endless possibilities that come with reusing electric vehicle batteries as part of a circular economy.”

Salvatore Bernabei, CEO of Enel Green Power, said: “The development of storage technology is key if we want to foster greater renewable penetration in our energy systems, so we can truly shape the power generation of the future. Furthermore, in the Enel Group, we are strongly committed to using technology that complies with the principles of sustainability and circularity. Specifically, this project demonstrates that, in line with the Open Innovation principles, we can find solutions for the management of the end of life of essential equipment such as batteries, a topic which is at the core of the sustainable energy issue.”

Ernesto Ciorra, Enel Group’s Chief Innovability® Officer: “This is a project we strongly believed in since day one. We involved important partners alongside counting on the relentless dedication of our colleagues and on a real, operating plant where we could implement storage solutions through second-life batteries. And what would have been called impossible only a few years ago became possible, became real.”

Used Nissan electric vehicle batteries provide a source of energy when they are interconnected and stored at Endesa’s Melilla facility with a power of 4 MW and the ability to produce up to 1.7 MWh of energy should the power plant be disconnected from the system, the storage facility can inject energy into Melilla’s electricity grid for 15 minutes, which is enough time to reset the system and restart the power supply.

Ensuring vehicle batteries remain sustainable continues to be a priority for Nissan and the Second Life project is another example of how Nissan is able to support a circular economy in line with Ambition 2030, the company’s long-term vision for empowering mobility and beyond.