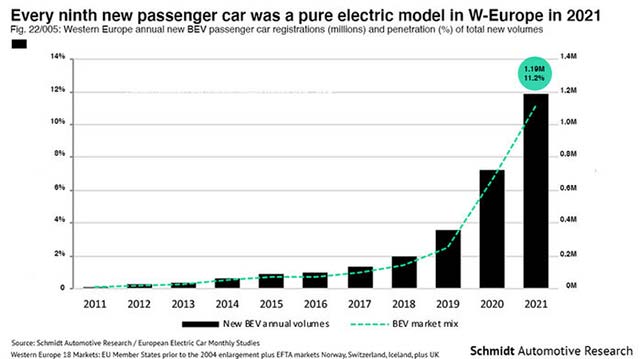 Before the champagne bottles are popped in celebration of a record year, with more than every tenth (11.2 per cent) new passenger car arriving on West European roads being a pure electric vehicle in 2021 – 2020 was almost half that rate at 6.4%, which appeared impressive at the time, given the CO2 boost in December last year – it is worth adding some perspective, given the BEV booster year we just witnessed, was in a total passenger car market that recorded its worst year for almost 40 years (2021: 10.6 million or the lowest level since 1984 – 10.2M).

In a normal average 14.2 million passenger car market year that same volume of BEVs would have equated to just 8.4 per cent mix of the market, giving perhaps some indication to how the market would have looked in a ‘normal’ non-pandemic year, where the word ‘semiconductor’ would have remained in the lexicon of just a handful of experts.

The bitter-pill and paradox is the realisation that plug-ins were likely being favoured by manufacturers with limited semiconductors in order to off-set their most profitable and consequently highest polluting vehicles in a form of carbon off-setting in order to meet European and UK CO2 fleet average legislation in a form of damage limitation mode which worked out surprisingly well for their bottom lines.

2022 is almost certainly likely to see a further growth in BEV volumes with the monthly European Electric Car Study published by Schmidt Automotive Research each month predicting a reduced pace in increase in 2022 to 1.54M (+29% y/y) or 350,000 more units, mainly attributed to the opening of Tesla’s German production facility and a total market returning in the second half requiring more BEVs to meet CO2 targets that see the final year of certain incentive mechanisms.

The Tesla Model Y, that is set to be manufactured just outside Berlin this year, slots into the SUV/Crossover sector that accounted for over 40% of all new BEVs registered in Western Europe last year.

The BEV mix in 2022 is only expected to rise slightly to 12.6% as the market returns and more affordable – and less profitable – lower emitting ICE vehicle volumes return in the second half of the year in a total passenger car market that is expected to reach 12.2 million units.