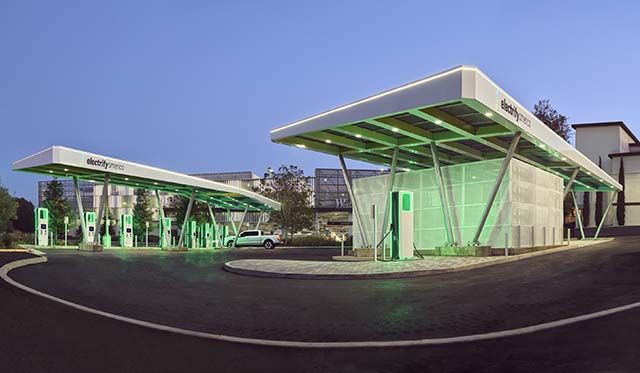 Electrify America has opened one of its largest EV charging stations to date, which will feature 14 ultra-fast chargers with solar canopies at Westfield Valley Fair in Santa Clara, California.

In just over three years, Electrify America has reached the milestone of 200 ultra-fast EV charging stations and over 830 individual chargers in California – one of the largest markets in the world for zero emission vehicles (ZEVs). Electrify America continues its long-term investment in California with convenient and accessible locations like the prominent shopping and dining destination, Westfield Valley Fair.

The company has committed to invest $800 million in charging network infrastructure, education, and awareness initiatives in California over ten years.

“This premier charging station, with one of our largest offerings of chargers and solar canopy technology, is another step in Electrify America’s journey to provide a seamless and innovative EV charging experience for consumers, while also taking measures to reduce the impact on the electrical grid,” said Anthony Lambkin, senior director of operations at Electrify America. “We are excited to bring this quality charging experience to Westfield customers in the heart of Silicon Valley.”

The 14 ultra-fast chargers available at this location will range in power from 150 kilowatt (kW) to 350kW – the fastest charging speed available today. The solar canopies above the chargers will provide customers with protection from the elements while being able to reduce electricity draw from the local utility. The solar panels charge a battery energy storage system (BESS) which can store power when electricity costs are low and supplement power during high points of consumption, minimizing impact on the electrical grid.

This installation is part of Electrify America’s plans to build charging stations at 17 Westfield locations, offering more than 100 individual chargers across seven U.S. states by the end of 2022. Focused on delivering the best in customer service, Westfield Valley Fair will be the first Westfield location to offer curbside meals delivered from the mall restaurants to the charging location with the service to be offered across other Westfield locations in the future.

“We are incredibly proud that Electrify America’s largest solar installation to date has found a home at Westfield Valley Fair,” said Shelly Schembre, SVP, Center Management Operations. “This is an incredible milestone for one of the most productive shopping centers in Northern California –  which is now among one of the region’s most environmentally-conscious shopping destinations as well.”

Electrify America stations coming soon to Westfield Locations in California and across the U.S.: