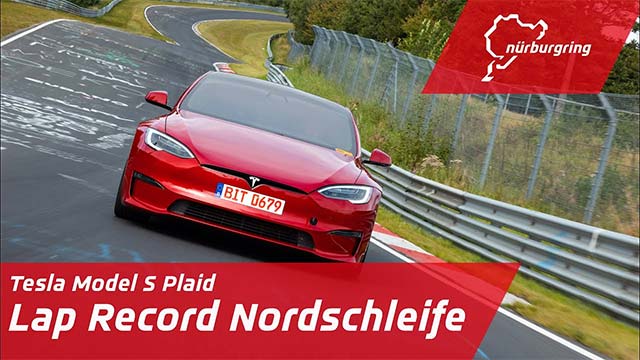 A Tesla Model S Plaid has set a new lap record for electric production cars at the Nurburgring Nordschleife.

The Model S Plaid circumnavigated the 20.8-kilometer (12.8-mile) Nordschleife in 7:35.579 minutes and reached a top speed of 279 km/h. The 1,020 hp vehicle with a tri-motor was driven by Swedish driver Andreas Simonsen.

The lap time is seven seconds quicker than the Porsche Taycan Turbo, which had held the electric production car record since 2019.

The news was tweeted by Tesla boss Elon Musk. Musk’s tweet shows a second, quicker lap time of 7:30.909, but this refers to a slightly different circuit layout. Musk’s tweet also showed an average speed for the record-breaking lap of 164.615 km/h

The Tesla boss added: “Next will be modified Plaid with added aero surfaces, carbon brakes and track tires (all things that can be done without Tesla being in the loop)”

Both Tesla and the Nurburgring released an official onboard video from the Model S Plaid.

The time is now listed in the category for electric production cars, which thus celebrates its premiere. All official times set on the Nordschleife so far can be found here.