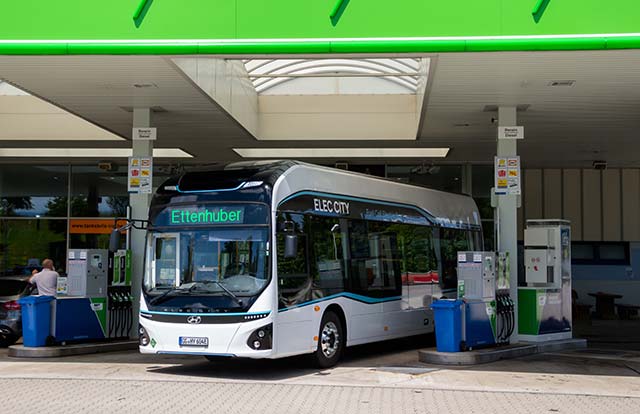 In the coming weeks, Hyundai Motor Company will work with bus operators in Germany to run in-service trials of its hydrogen-powered Elec City Fuel Cell bus as the company explores opportunities to introduce the zero-emission bus to European markets.

Hyundai Motor plans to run demos with four more bus operators this year, collecting passenger and driver feedback along the way. Through the demo runs, the company expects to prove hydrogen-powered buses as a viable, efficient solution for commercial transportation. Elec City Fuel Cell has been commercially available in Korea since 2019 and a total of 108 units have been put into operation.

The hydrogen-powered buses being used in various public bus routes in the country have avoided reduced carbon emissions by an estimated 7,700 tons to date compared to internal combustion buses. On a yearly basis, Elec City Fuel Cell buses that are currently in operation are expected to reduce carbon emissions by the equivalent amount of CO2 sequestered in a year by 1,500 hectares of forest.

Hyundai is constantly reviewing ways to lower the CO2 footprint of mobility in general. By offering eco-friendly, heavy-duty trucks and buses, the company is addressing this matter head on. Hyundai plans to proactively promote hydrogen fuel cell technology as a powerful mobility solution.