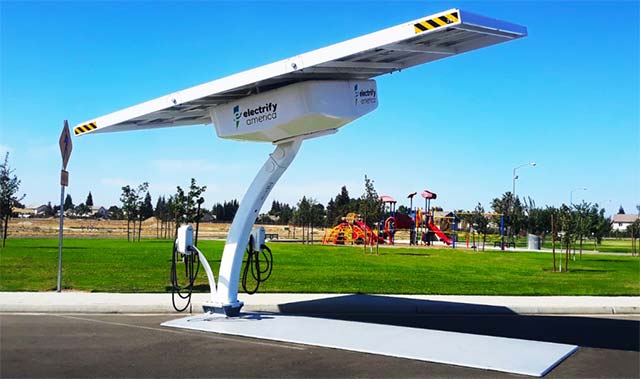 Electrify America announced its plan to invest $200 million in California Zero EV infrastructure and education programs over the next 30 months. This represents the third of four investment phases as part of its 10-year commitment of $800 million in the state.

Additionally, the company will direct $25 million of the $200 million investment for an initiative in the City of Long Beach and the Wilmington neighborhood of Los Angeles (Long Beach-Wilmington), for a “Green City” program. This initiative will have a specific focus on charging station investments for electric transit buses and medium / heavy-duty trucks located in or serving the community.

Following the success and key learnings of building EV infrastructure from its previous $400 million investment in California over the last five years, Electrify America will focus the $200 million across three main categories: Infrastructure; Public Education, Awareness, Access & Marketing; and Green Cities. Additionally, Electrify America will strive to ensure that 35 percent of the investment is in low-income and disadvantaged communities, as guided by California Air Resources Board (CARB).

The California ZEV Investment Plan provides ultra-fast charging in more metro areas, as well as strengthens highway and regional charge routes while providing charging infrastructure and solutions for medium and heavy-duty fleets. Approximately 90 percent of Californians now live within 15 miles of an Electrify America ultra-fast charger, with 96 percent living within 25 miles. Electrify America’s continued investment in the state will only strengthen these statistics through wider accessibility to charging options in the years to come.

In addition to infrastructure, the investment will continue broad brand-neutral ZEV education and awareness efforts, and development of the second Green City program in the Long Beach-Wilmington community. Electrify America would begin implementation upon approval by CARB, and continue these investments through June 30, 2024.

Building on Electrify America’s first successful Green City program in Sacramento, the company will work with Long Beach and Los Angeles city officials and fleet operators to implement projects focused on charging transit and heavy-duty electric vehicles, showcasing ultra-fast charging technology, energy storage and renewables and energy management for these two emerging use cases. Efforts will focus on tackling medium and heavy-duty emissions in a predominantly disadvantaged and low-income community, which is classified as an extreme non-attainment area under the Clean Air Act (sixty-four percent of Long Beach/Wilmington community is classified as low-income and disadvantaged by the California Air Resources Board.)

Electrify America conducted a detailed and quantitative evaluation to determine where to focus Green City investments that would meet the greatest needs and most positively impact the host community. Insights from this analysis revealed that CARB’s zero emission truck mandate, approved in June 2020, and CARB’s Innovative Clean Transit Regulation, adopted in 2018, have spurred a significant, and serious new effort by fleet operators to electrify fleets. Working with that framework, Electrify America recognized the strong need for transit and heavy-duty truck charging solutions as part of this investment.

Electrify America will work within the greater Los Angeles region to identify additional opportunities to enhance charging infrastructure and technology, specifically for business fleets and larger scale operational efforts, a key growth area for the industry and a major contributor to emissions. Additionally, Electrify America will focus resources on regional shipping as an opportunity to help encourage the electrification of equipment and vehicles to reduce emissions. The Ports of Los Angeles and Long Beach are breaking cargo records for the last seven months, with shipping volumes up 46 and 43 percent respectively, year-over-year.

– Transit and Medium-Duty/Heavy-Duty Fleet Charging: Both the transit and medium/heavy-duty sectors are poised for significant growth over the coming decade. Electrify America is investing in infrastructure to support these emerging, but transformational, technologies.

– Hardware Development and Capacity Building: Electrify America plans to invest in new tools and techniques, such as site-level energy management and energy modeling, to drive down both capital and operating costs, and ensure a fast, reliable, and customer-centric experience at all of our stations.

– Rural Investments: As part of the plan, the company will build off its more than $81 million investment to date in rural parts of the state, including the Central Valley, where Electrify America has built more stations to date than any other charging provider.

– Sponsoring and Supporting ZEV Education and Training Efforts of Others: Electrify America will continue investing to collaborate with local organizations working specifically within California’s low-income and disadvantaged communities to increase ZEV adoption, building on the more than $6 million of support for local organizations to date. Electrify America will also continue to sponsor the effective brand-neutral education, awareness, and workforce training efforts of other organizations, continuing our past support for the great work of organizations such as Veloz, EV Noire, Plug In America and the LA Cleantech Incubator.

This California ZEV Investment Plan benefited from collaboration with the California Air Resources Board and Staff and a comprehensive national outreach period, during which Electrify America evaluated more than 14 California communities and more than 160 submissions offering input on potential ZEV initiatives. The company held virtual community meetings across California focused on local government and community-based organizations, and engaged with California’s leading academics to ensure an effective, equitable and efficient plan to significantly increase broad electric vehicle adoption in the state.