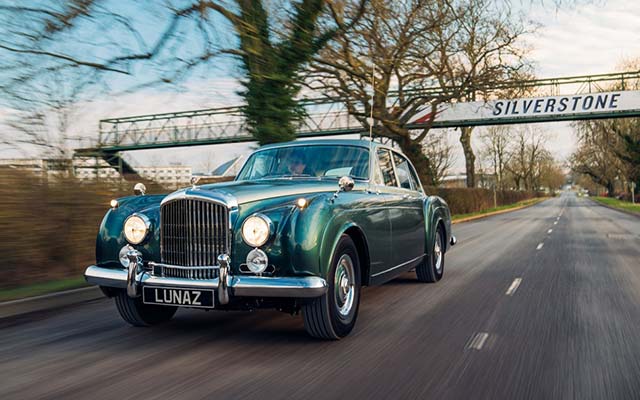 Lunaz, the electric vehicle engineering company and creator of electric classic cars will grow its global manufacturing headquarters by 500% in the Spring of 2021. The company will increase from its current 8,000 sq/ft facility to a 40,000 sq/ft high-tech engineering, design and manufacturing centre adjacent to its current home. This will be the largest occupied manufacturing space within the Silverstone Technology Cluster in Britain’s advanced engineering heartland.

A significantly expanded UK manufacturing footprint forms a key pillar of a multi-phased growth strategy that will see Lunaz become a global leader in the conversion of passenger and industrial vehicles. In the immediate term, expanded production capacity is required to meet rapidly growing global demand for clean-air, up-cycled expressions of the most admired classic cars in history. Lunaz enjoyed significant success in 2020 despite challenging market conditions. This growth follows the highly successful market introduction of the world’s first electric classic Rolls-Royce, Range Rover and Jaguar sportscars.

This success is underpinned by rapidly expanding global demand for truly sustainable luxury goods. Governments in many major markets are also engaged in creating legislation that will ban the sale of new petrol, diesel and hybrid powertrains in the coming two decades. This includes Lunaz’ home market of Britain, where Prime Minister, Boris Johnson, announced a ban on the sale of new cars with internal combustion powertrains will be brought forward from to 2030.

“The Bentley Continental is the definitive British grand touring machine. Customers across the globe asked us to create the world’s first electric expressions of these iconic cars. The result marries the beauty and presence of these extraordinary cars with a proven answer to the key questions of reliability, usability and sustainability that surrounds classic car ownership. We are proud to further the legacy of the Bentley Continental with the start of full production from our significantly expanded UK manufacturing presence.”
David Lorenz, Founder, Lunaz Design

The most recently completed car is a 1961 Bentley S3 Continental Flying Spur by H.J Mulliner. It demonstrates the breadth of possibilities through collaboration between a Lunaz customer and the company’s design team, with the car presented in a contrasting yet harmonious two-tone exterior paint configuration.

The interior cabin delicately echoes the exterior aesthetic with leathers finished in a tone that matches the lustrous greens on the exterior and burr walnut hand-restored by Lunaz’ master craftspeople. The car subtly integrates modern conveniences derived from Lunaz’ re-engineering process. This includes the up-rating of suspension, brakes and the inclusion of power-steering and air-conditioning. An infotainment screen is subtly integrated to provide modern functionality like navigation and Apple CarPlay with no compromise to the authenticity of the classic design aesthetic. 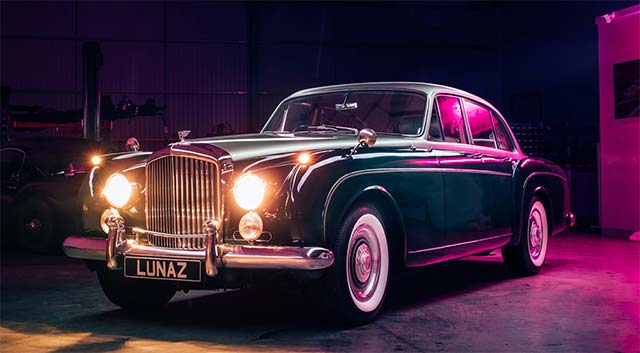 The car will be used daily by one of the UK’s most eminent car collectors and includes the integration of child seats to the rear, finished in leather that matches the interior scheme.

Following private dialogue with its global customer base, Lunaz has been commissioned to restore, electrify and re-engineer some of the rarest coachbuilt examples in the breed’s history. This includes two highly coveted James Young Cars.

Every classic electric Bentley by Lunaz will be subject to the same bare-metal restoration process that every Lunaz marque undergoes. Each will be offered with full modernisation through the firm’s re-engineering process before it is converted to the Lunaz proprietary electric powertrain.

These cars will be offered in strictly limited production allocations with deliveries already in progress.  Prices for original factory steel-body cars start at £350,000 excluding local taxes.

Lunaz’ new facility, which is due to be completed in the early spring of 2021 will include a state-of-the-art design and R&D hub for the company. Key technologies including surface finish, battery engineering, body restoration and craft shops for both soft and hard finishes will be housed within the new facility.

As restrictions relating to the global pandemic ease in the summer, customers will benefit from access to a hosting space on the second floor of the building with an uninterrupted view of the Silverstone Racetrack with an aspect to the podium and Club Corner. Beyond serving as the perfect experience for race-days, this suite will be the place that customers come to consult with Lunaz’ Design Team.

Classic cars by Lunaz Design represent a tailored collaboration between its customer and the company’s team of designers. The factory is designed from the ground-up to provide them with the opportunity to engage with every facet of the restoration, re-engineering and conversion of their cars.

In establishing the Lunaz Design brand as the leading conversion specialist for pinnacle classic cars, the company has developed a modular and proprietary electric powertrain. This has been led by former double F1 World Championship winning Technical Director, Jon Hitlon who has drawn an engineering team from names including: McLaren, Prodrive, F1, Aston Martin, Rolls-Royce, Ferrari and Bentley.

The Lunaz powertrain will scale to uses far beyond the conversion of classic cars. Legislation is already in place that is driving government and private entities towards replacing existing ICE fleets with electric vehicles. Conversion and up-cycling of these vehicles represents a far more cost-effective and sustainable proposition than commissioning entirely new assets. Lunaz is poised to serve this demand in line with the principles of the circular economy.

As the Lunaz Group moves through its growth phases through presence in key global markets, the new facility will establish a permanent British HQ. This will include an R&D hub and design centre for the company as it develops these new applications for the Lunaz proprietary electric powertrain. The establishment of this home facility signals a commitment to England and more specifically Silverstone as its global centre of excellence.

Lunaz will announce growth to both its classic car model portfolio and wider applications in the coming months.