The Renault 5 Prototype: Shining a light on the past with the iconic wink [video] 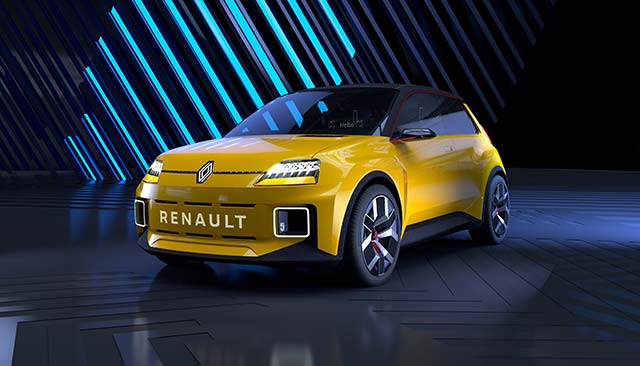 A cult car from the 70’s with winking headlights, does that mean anything to you? The R5 of course! Its mischievous look is part of our heritage and the Renault 5 prototype unveiled in January cannot deny its ancestor. Nicolas Jardin, the prototype’s exterior designer, tells us how he reinterpreted the famous look of the original Renault 5 in a modern way.

Ah, the R5! Everybody knows its mischievous and mutinous look that quickly became as cult as the car itself. As early as 1972, the year of its release, Renault personified this look in Les aventures de Supercar, the famous advertising cartoon. It could also be seen on the roads during the “Take the wheel” operation carried out at the time. The Renault 5, adorned with pretty eyes on its headlights, was then going to meet the French people. It is this emblematic and knowing look that Nicolas Jardin wanted to reproduce on the Renault 5 Prototype. While propelling it into the future.

From the cult look to reinterpretation

The Renault 5 Prototype, which was unveiled on January 14th and which prefigures a future electric model that will be the heir to the R5, has already been the subject of much ink. It must be said that its designers have brilliantly reinterpreted the original style of the 1972 version. Without being retro, the prototype displays the immediately recognizable genes of its cult ancestor. From the heart of the Technocentre, the site where the concepts and models of Groupe Renault are developed, Nicolas Jardin reveals the genesis of the project:

“The work on the prototype was not a free subject. It was a work of reinterpretation of the R5 and its projection into the future, to make it a modern object.”

To redesign the mischievous headlights and daytime running lights, “everything started from the lines, angles and radii of the elements of the front of the original R5. Then, during the sketches, the headlights became completely different in their proportions as well as in their design.”

Their final version, very worked, very chiseled, evokes laughing, slightly wrinkled eyes. As for the daytime running lights, rectangular in shape at the bottom, reminiscent of the additional fog lamps of the time, they fit into a bumper in body color, as they did originally. “Their crystal and three-dimensional treatment, their very precise cut evokes laser cutting and invokes the worlds of aerodynamics and aeronautics.”

Technology at the service of expressiveness

Finally, ultra-modern processes have taken over to reinvent the iconic look of the R5. Notably the LED matrix technology that allows the integration of movement by programming animations to bring the headlights to life. This is illustrated with the welcome sequence. The car’s new logo lights up and triggers an animation that extends into the front grille. Then the headlights come to life as if the car blinks. Impossible to miss this wink!

“Thanks to the matrix technology and animations in the welcome sequence, we were able to recreate the expressiveness and mischievousness of the original car’s look.”

Thus, whether in their design or their technology, the Renault 5 Prototype’s headlights have, on paper, little in common with those of the R5 of the time. And yet we recognize its look. The bet is won! “To be a worthy heir to the R5, the car had to become expressive and lively. We have succeeded in this feat with this prototype, a true object of modern design, embodying the Renault « joie de vivre »,” concludes Nicolas Jardin.