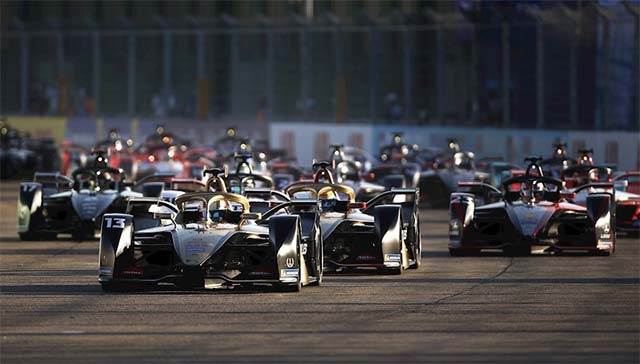 Formula E has been driving progress ever since the idea for a world-class all-electric international single-seater championship was settled upon by Formula E Chairman Alejandro Agag and FIA President Jean Todt back in 2011. Here are seven ways Formula E has always been accelerating change.

The idea for an all-electric street racing series started out as nothing more than notes on a napkin.

On the evening of March 3, 2011, FIA President Jean Todt and Formula E Chairman Alejandro Agag, met in a Paris restaurant and gathered their thoughts in just a few words on what would become the world’s first all-electric international single-seater championship. 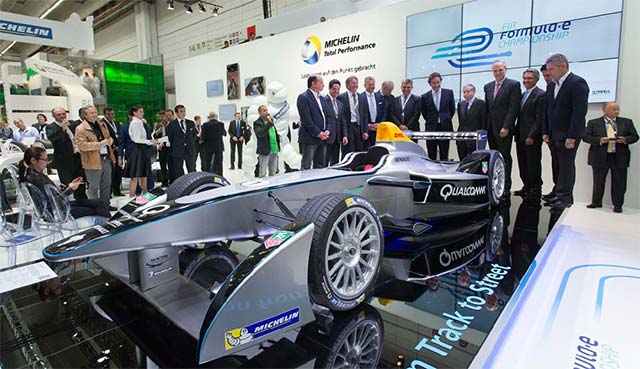 Formula E’s founding mission was for its race through the streets of the most iconic cities in the world – with a grid full of the best racing drivers and teams around – to show just what sustainable mobility was capable of, driving electric vehicles to the fore in the race for a better, cleaner future.

Since making its debut in the grounds of the Olympic Park in Beijing in 2014, Formula E has grown into a global entertainment brand with motorsport at its heart. Now, with 12 teams and 24 drivers on the grid, the championship has become a destination for the world’s best motorsport teams and racing talent.

Formula E’s founding purpose has since evolved into an all-encompassing race for better futures through racing in alignment with the FIA’s #PurposeDriven movement – driving its environmental, economic and social sustainability initiatives around the world.

In 2020, Formula E announced that it had become the first sport with a net zero carbon footprint since inception, investing in internationally certified projects in all of its race regions to offset emissions from six seasons to-date of electric racing.

The announcement was made during the launch of Climate Week NYC 2020. Following the recommended approach set out by the UN Framework Convention on Climate Change (UNFCCC).

Working closely with Quantis, the leading life cycle assessment and sustainability experts, Formula E has been calculating the overall footprint of the championship since its inaugural season, with a continual focus on lowering emissions.

Its emission reduction measures, including optimising transport and logistics, extending end-of-life options for lithium-ion battery cells and cutting out single-use plastics on site, led to Formula E becoming the first and only racing category to receive third-party ISO 20121 certification for sustainable events.

Unavoidable emissions from the past six seasons have now also been certified as offset through investment in Gold Standard and Verified Carbon Standard UN projects in line with the UNFCCC’s Clean Development Mechanism.

Whilst Formula E is just six seasons old, the on-track technology is ever-evolving and has undergone revolutionary changes in that six-year spell.

In Season 1, back in 2014, Formula E ushered in a revolution with the all-electric open-wheel Gen1 car – a first of its kind in motorsport.

In the six short years since, the championship has waved goodbye to that initial era of mid-race car swaps and welcomed the next step-change in technology for Formula E with Gen2 in Season 5. More power and almost twice the usable energy capacity, effectively doubling range despite its battery being about the same size and weight as its predecessor.

The Gen3 Formula E car will see another leap forward in terms of performance on-track, and not only that but it’s going to be more sustainably-produced than ever before.

Manufacturers must propose a full Life Cycle Assessment for their proposed car, with challenges made on the use of sustainable materials, the lifespan of consumables, recycling and second life projects for used components and more.

On the road, the number of electric car models has increased by six times since Formula E’s first season, with more than 175 now available in Europe.

As with the Gen2 car, and the continuing evolution of Formula E’s on-track tech, range and battery capacity has also moved on leaps and bounds in consumer EVs.

The best-selling EV in the world since 2015 has seen its battery capacity and range treble compared with the original 2015 model. In the same five-year spell, the number of EV chargers in Europe has increased more than three times over, with some 170,000 now built into infrastructure across the continent.

“As technology develops, electric cars will be able to go faster and further. The pace of development is incredible,” says 2016/17 Formula E champion Lucas di Grassi (Audi Sport ABT Schaeffler). “The point at which electric cars are cheaper, safer and easier to operate than combustion-engined cars is not far away at all and Formula E is accelerating that process. Combustion won’t be able to keep up.

“The purpose is to create a better, cleaner, safer future for mankind with innovation and technology. In general, people will naturally go for convenience and necessity, as well as the cheapest, best solution for them.

“So, we need to create technology that fills this gap and serves this purpose, then, the best option will be the most sustainable one – that’s the win-win situation to chase.”

What started as nothing more than a shared dream between Formula E Founder Alejandro Agag and FIA President Jean Todt, sketched on the back of a napkin back in 2011, has developed into the fastest growing and most competitive motorsport series on the planet.

Ahead of the 2020/21 season, after six seasons of racing on the streets of the world’s most progressive cities, Formula E gained World Championship status to become the ABB FIA Formula E World Championship – a move granted by the FIA, motorsport’s governing body, back in December 2019.

“It was always our ambition to one day become an FIA World Championship. Everything we have done and delivered has been working towards this particular moment,” said Formula E founder and chairman Alejandro Agag at the time.

“This truly puts Formula E in the top tier of international single-seater racing. It has been a tremendous effort from many people involved and none of it would have been possible without the support of FIA President Jean Todt and the federation, as well as the dedication and commitment shown by our teams and partners.

“Now we can say we have done it but it is only the beginning of a new chapter under the banner of the ABB FIA Formula E World Championship.”

“The creation and development of Formula E has been a great adventure. I am proud that today we confirm its FIA world championship status,” added FIA President Jean Todt.

“Since we started this journey, Formula E has undoubtedly gone from strength to strength. Within a short timeframe, the series has proven itself relevant for the automotive industry.

“The commitment and professionalism of those manufacturers and their respective teams is mirrored in the quality of the driver roster, which has improved with every season.”

The most competitive line-up in Formula E history

From Season 7, the most competitive line-up in motor racing will fight it out for the ABB FIA Formula E World Championship with 12 teams, including 10 manufacturer outfits, and 24 of the best drivers in world motorsport heading to the season-opener.

With five different champions and 17 different race winners in six seasons of Formula E to-date, the only thing that will be predictable in 2020/21 is unpredictability. 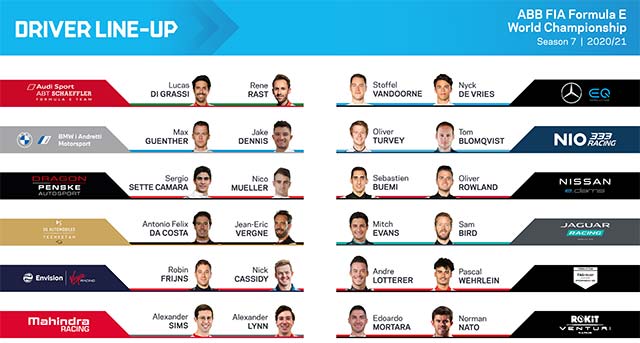 The official pre-season test in Valencia back in November gave us a glimpse of just how hotly-contested the forthcoming season is likely to be with the whole field separated by little more than three-quarters of a second during the final – and most competitive – session of the test.

To put an exact figure on it, all 24 runners lapped within just 0.761 seconds of one-another, and every driver save for Lucas di Grassi (Audi Sport ABT Schaeffler) was, incredibly, covered by little over half-a-second.

No Formula E pre-season test has has seen a tighter spread of times, even when the championship required all teams run standardised powertrains in the inaugural 2014/15 campaign.

The top ten runners in that session drive for eight different teams, and on top of that, each of the five sessions from Valencia saw a different driver from a different squad, representing a different manufacturer at the top of the timesheets.

Who’ll get the jump on the rest when we get under way with a double-header in the dark for Formula E’s first night races in Diriyah, Saudi Arabia on February 26 & 27?

To ensure the championship continues to advance its vision and objectives, Formula E reports and evaluates progress annually, using recognitions to reinforce and legitimise its efforts.

Since the inaugural 2014/15 campaign, Formula E has become:

– A signatory of the UNFCCC’s Climate Neutral Now initiative in 2020 and adherent to the UNFCCC’s Sports for Climate Action Framework – supporting all levels of society to take climate action to achieve a climate neutral world by mid-century, as enshrined in the Paris Agreement

– A signatory of the EU 2030 letter supporting the UN’s global Race to Zero campaign for a decarbonised economy that guards against future threats, creates quality employment opportunities and nurtures inclusive, sustainable growth

– A signatory of the United Nations’ Sustainable Development Goals (SDGs) cut across every area of our business practise. Formula E directly contributes to 9 of the 17 SDGs, thanks to its promotion of electric vehicles, partnerships to fight climate change and support of technological advancements

– A signatory of The Climate Group’s RE100 initiative with CDP, to support influential companies working towards 100 per cent renewable energy targets