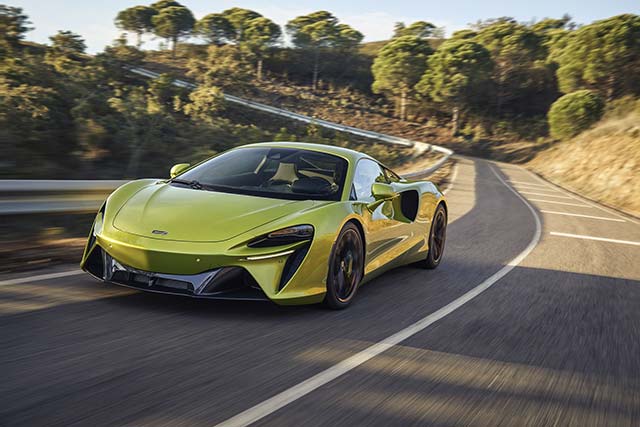 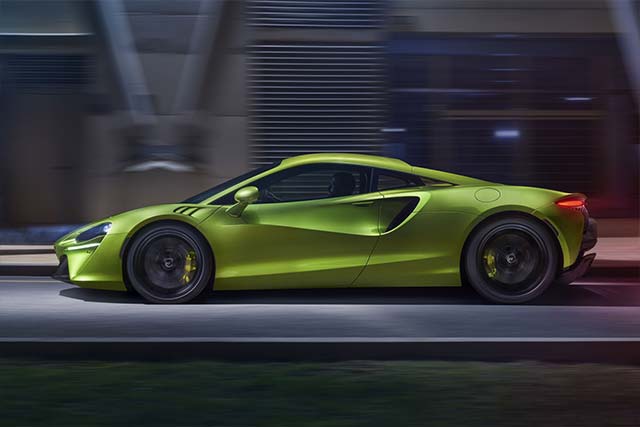 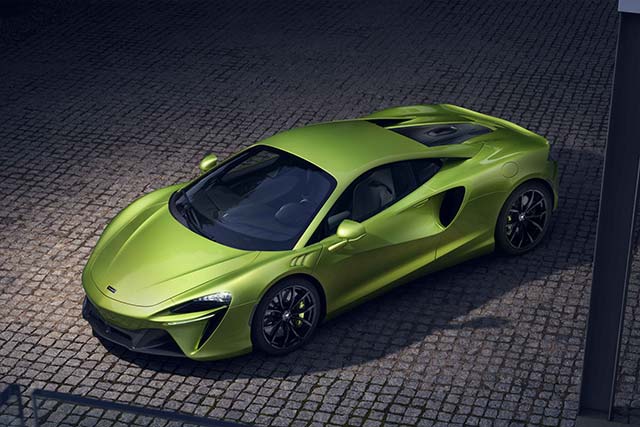 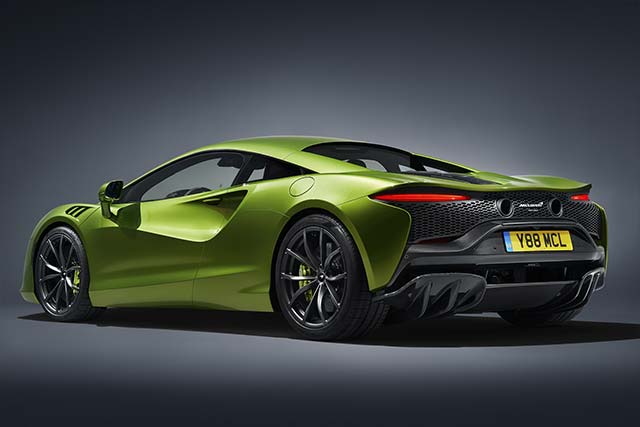 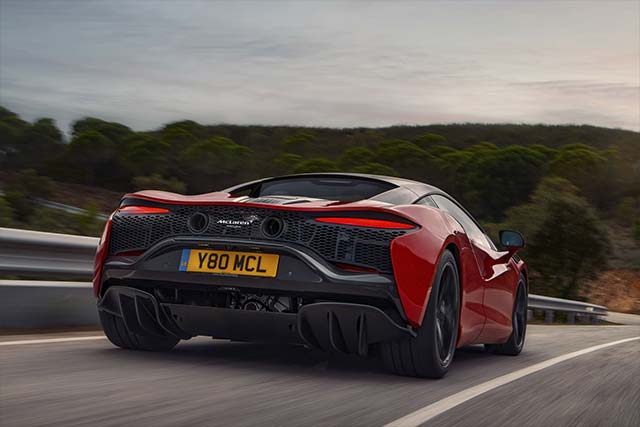 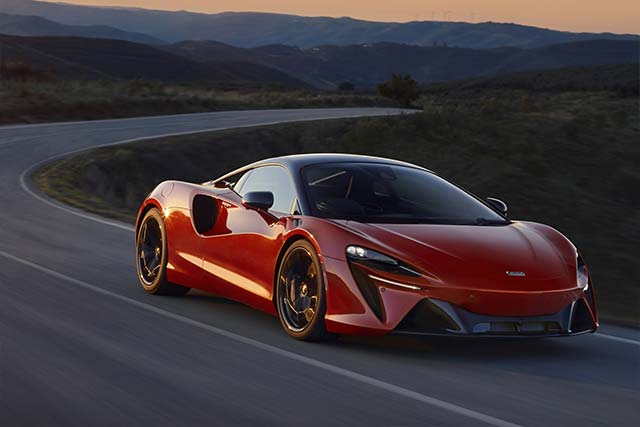 The McLaren Artura was revealed to the world in a spectacular digital launch coming from its global headquarters featuring McLaren’s new Formula 1 driver Daniel Ricciardo.

The all-new Artura is the company’s first high-performance hybrid series supercar and opens a new era for electrification across the McLaren range.

Underpinned by the McLaren philosophy of super-lightweight engineering, the all-new Artura is the distillation of every attribute inherent in a McLaren – distinctive design, unrivalled performance, dynamic excellence and engineering innovation – with electrification now bringing the additional benefits of even faster throttle response, lower emissions and being able to run in pure EV mode for emissions-free journeys of up to 30km (18.6 miles).

All-new from the ground up, the Artura presented McLaren engineers and designers with new opportunities to innovate, chief among these being how to preserve McLaren’s super-lightweight engineering philosophy when adding hybrid powertrain elements including an E-motor and battery pack.

A demanding programme of weight reduction, encompassing every area of the Artura from the chassis platform – this is the debut of the new McLaren Carbon Lightweight Architecture (MCLA) – through the uniquely compact HPH powertrain system to the weight of cabling used in the electrical systems (where a 10% reduction was achieved), resulted in the Artura having a lightest dry weight of 1,395kg. The total weight of hybrid components is just 130kg (which includes an 88kg battery pack and 15.4kg E-motor), resulting in a DIN kerbweight of 1,498kg which is on par with comparable supercars that do not have hybrid powertrains, giving the Artura a super-lightweight advantage.

“Every drop of McLaren’s experience and expertise has been poured into the Artura. Our all-new, High-Performance Hybrid delivers all of the performance, driver engagement and dynamic excellence for which McLaren is renowned, with the additional benefit of EV driving capability. The introduction of the Artura is a landmark moment – for McLaren, for our customers who will appreciate and enjoy this car on every emotional and rational level, and for the supercar world,” said Mike Flewitt, CEO, McLaren Automotive.

At the heart of the Artura’s powertrain is McLaren’s all-new, 2,993cc twin-turbocharged V6 petrol engine. With a power output of 585PS – nearly 200 PS per litre – and 585Nm of torque, the dry-sump aluminium engine is compact and lightweight; at just 160kg it weighs 50kg less than a McLaren V8 and is significantly shorter, enhancing packaging efficiency.

Designed to run with a Gasoline Particulate Filter to optimise emissions performance, the M630 engine is also extremely refined. The 120° v-angle of the engine, which allows the turbochargers to be positioned within the ‘hot vee’, delivers further advantages in packaging as well as contributing to a lower centre of gravity. The 120° layout increases engine performance by reducing the pressure losses through the exhaust system and allows for a stiffer crankshaft that enables a rev limit of 8,500rpm, maximising performance and driver engagement.

Working in harmony with the new V6 is the Artura’s compact axial flux E-motor, located within the transmission bell housing. Smaller and more power-dense than a conventional radial flux E-motor, it is capable of generating 95PS and 225Nm and boasts a power density per kilo 33% greater than the system used in the McLaren P1. The instantaneous nature of the motor’s torque delivery – known as ‘torque infill’ – is key to the car’s razor-sharp throttle response. Exhilarating ‘off-the-line’ performance sees the Artura achieve 0-100km/h (0-62mph) in just 3.0 seconds, with 0-200km/h (0-124mph) taking 8.3 seconds and 0-300km/h (0-186mph) 21.5 seconds. Top speed is limited to 330km/h (205mph).

The dual propulsion systems are integrated via an engine disconnect clutch, driving an all-new, twin-clutch transmission, which has been developed specifically for the Artura. Despite having one more ratio than the existing McLaren transmission – to optimise power and torque delivery – the lightweight, short-ratio gear cluster is 40mm shorter in length. It also requires no reverse gear – the E-motor takes care of reversing by literally rotating in the opposite direction.

The E-motor is powered by a battery pack comprising five lithium-ion modules, offering a usable energy capacity of 7.4kWh and a pure EV range of 30km (18.6 miles). The battery is refrigerant cooled using cooling rails, and the assembly – including a power distribution unit which transfers battery power from the rear of the vehicle to the ancillaries in the front – is mounted on a structural carbon fibre floor. This assembly is then bolted onto the rear base of the monocoque, optimising stiffness, weight distribution and crash protection.

The Artura is designed with full Plug-in Hybrid (PHEV) capability and can be charged to an 80% charge level in just 2.5 hours with a standard EVSE cable. The batteries can also harvest power from the combustion engine during driving, tailored to the driving mode selected.

The McLaren Artura is the first model to have the new McLaren Carbon Lightweight Architecture (MCLA) at its core. Designed and manufactured at the McLaren Composites Technology Centre (MCTC) in the Sheffield region, MCLA sets a new standard for McLaren’s advanced flexible chassis design. Optimised for high-performance hybrid applications, it includes a bespoke battery compartment and introduces a ground-breaking domain-based ethernet electrical architecture, along with an electrical heating, ventilation and air-conditioning (eHVAC) system.

Inside, the Artura is no less of a revolution, with the cockpit centred more than ever around the driver. The driving mode selection – which retains separate Powertrain and Handling controls – has been moved to the instrument binnacle, which is in turn mounted to the steering column and adjusts with the steering wheel to further enhance driving ergonomics. Consequently, the steering wheel is kept clear of unnecessary switches, however, the driver is still able to adjust driving modes without taking their hands away from the wheel.

The driver can choose from four Powertrain modes, including an E-mode for 30km of emissions-free, electric-only driving. Designed for mixed driving conditions, Comfort mode maximises range and efficiency, with the combustion engine shut off under 40km/h with the use of an extended stop and start mode but phased in for greater speed and power requirements. In Sport and Track modes, electric power is deployed in an increasingly aggressive manner for low-end response and acceleration (‘torque infill’). Separate handling mode choices adjust damper firmness and the degree of Electronic Stability Control intervention to suit driver preference and weather and road conditions.

At the outset McLaren designed the Artura to be not only a technological game-changer, but also to stay true to the core McLaren attributes of being incredibly engaging to drive and displaying the highest levels of dynamic ability.  Designed to excel on both road and track, the Artura also boasts the dynamic refinement to make serene progress through urban streets in EV mode.

Every Artura comes with a five-year vehicle warranty, a six-year battery warranty and 10-year body warranty.

Advance orders for the all-new McLaren Artura are now being taken at McLaren retailers with first deliveries to customers expected in Q3 of this year.