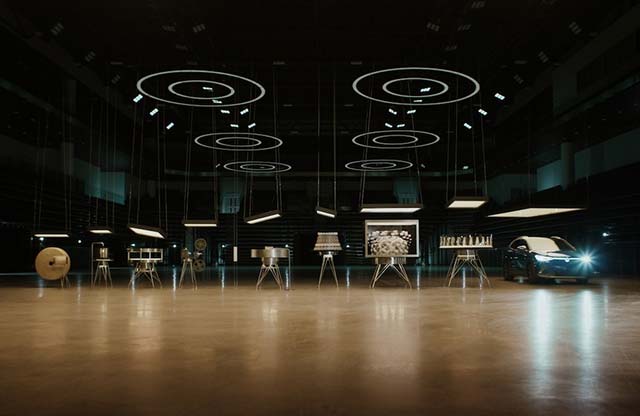 Volkswagen has a history of groundbreaking, memorable advertising, and the new all-electric ID.4 coming this spring has inspired its next chapter with a visually stunning demonstration of transportation’s progress from the wheel to the EV future.

The ad, created by Johannes Leonardo, was the result of months of planning and imagination using different types of zoetropes – forerunners of motion pictures that were the first examples of animation. All zoetropes in the ad were real machines instead of digital effects, built by hand and precisely synchronized to showcase the innovations that have led to the Volkswagen ID.4 and future Volkswagen electric vehicles.

“We wanted to get across the ideas that this was a historic moment of innovation becoming accessible,” said Patrick Wells, copywriter at Johannes Leonardo (JL). “Electric cars have been around a while, but the adoption rate has been slow, and it was key that we show how momentous this moment can be.”

The ad’s concept grew from the idea of showing how technology has progressed from the wheel to the electric vehicle, inspired by the classic “stages of man”-type drawings. To make the progression visually interesting, JL chose to build an animation of key innovations using zoetropes – devices that create optical illusions of motion.

Using 3D printing, archive photos and hand-drawn images, the zoetropes take different shapes in the progression. The first is technically a phenakistoscope – a wheel with images on its edges that create motion when spun. Others include a classic zoetrope and a praxinoscope, an invention from the 1870s that uses a ring of mirrors to animate images. The creators also used different styles of animations to highlight different eras, like the “rubber hose” movements of early cartoons in the 1920s and ‘30s, along with nods to VW history via images of the original Beetle.

“By telling a story through devices, we’re showing the progress of technology on multiple levels,” said Iwona Usakiewicz, art director for JL. “As we move through the ad the machines become more complex, and the visuals build to a nice transition to the Volkswagen ID.4 EV.”

All of the devices were arranged and timed so that they could be filmed in one take. Each had to be tailored to move at just the right speed to create their animated visual effects on digital video. The results are captivating:

“We wanted to use the wheel as a motif, to show how technology progresses and put the arrival of the Volkswagen ID.4 in context,” said Kevin Watkins, creative director at JL. “The spot reflects how important this moment of transition to electric mobility will be.”

The Volkswagen ID.4 Pro S and 1st Edition models are expected to arrive in dealers this March, with 201 hp and 250 miles of EPA-rated range.