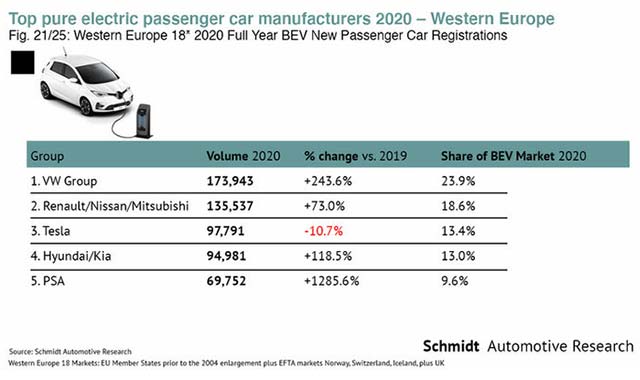 As manufacturers scrambled to meet EU (and Swiss) CO2 compliance levels with a last-minute registrations splash-and-dash in December, contributing to total xEV (BEV/PHEV) plug-in registrations exceeding 0.5 million units in the final quarter of the year, as billed: 2020 lived up to its claim of being the first genuine year where EVs moved from the slow hanging fruit lane to the mainstream, narrowly failing to miss this report’s pre-COVID original forecast of 770,000 units. 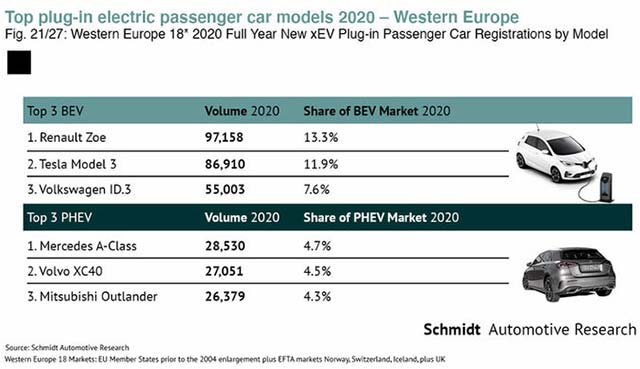 According to Volkswagen Group, the Wolfsburg-based German manufacturer, revealed that they failed to meet their CO2 target, falling short by 0.5g/km. A company spokesperson told this report that it was likely contributed to by the ID.3 (MEB) model’s delayed market launch, resulting from software issues delaying customer deliveries.

Long-billed as the kick-start to Europe’s move away from ICEs and towards EVs thanks to the EU block’s CO2 legislation essentially forcing car manufacturers hand, 2020 produced the goods with December even witnessing every fourth new passenger car registration being a plug-in.

As an immediate sequel, thanks to the EU fleet average CO2 emissions targets only being phased-in last year, with the worst 5 per cent from each fleet being omitted, 2021 will see momentum maintained if be it with a slightly reduced growth rate. In 2021 manufacturers entire fleet will count towards average fleet totals as well as a reduced value of so- called super-credits on offer (if manufacturers have any of their limited 7.5g/km amount left, spread over three years).

2021 is consequently set to be the full gala evening performance following the afternoon press- preview event in 2020.

With PHEVs added to the equation, key in helping meet compliance, especially for premium manufactures, the 2021 xEV market is forecast to account for 15.5 per cent of the market, or 1.907 million units.