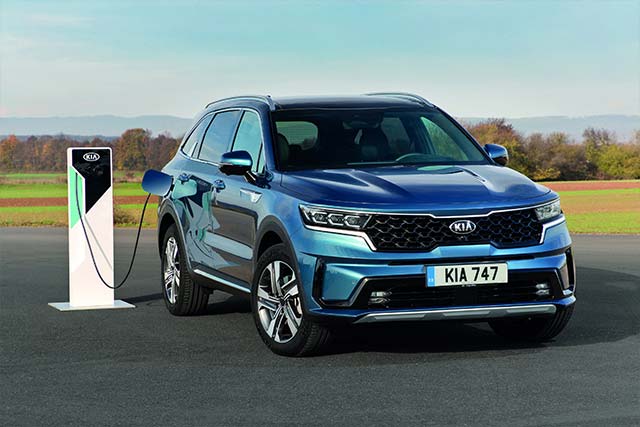 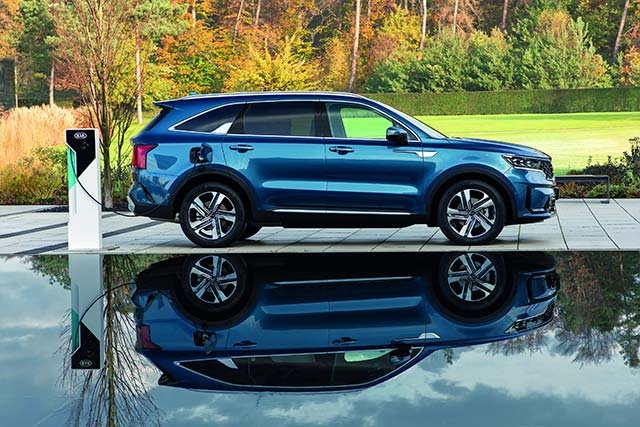 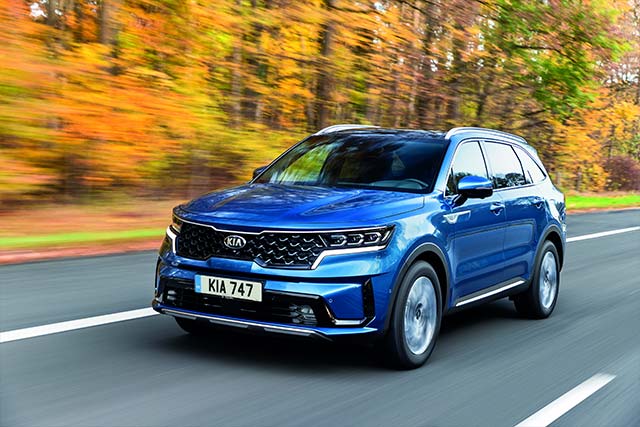 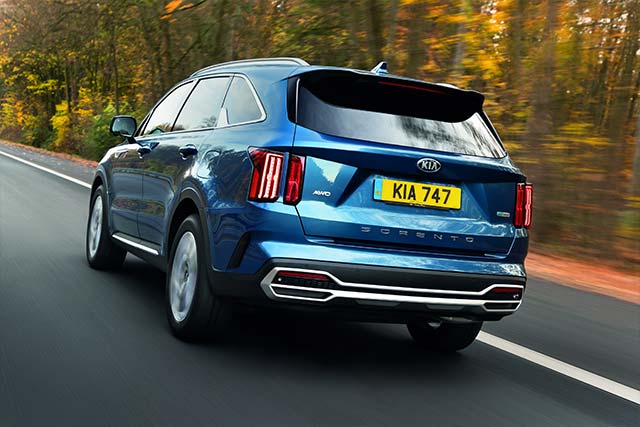 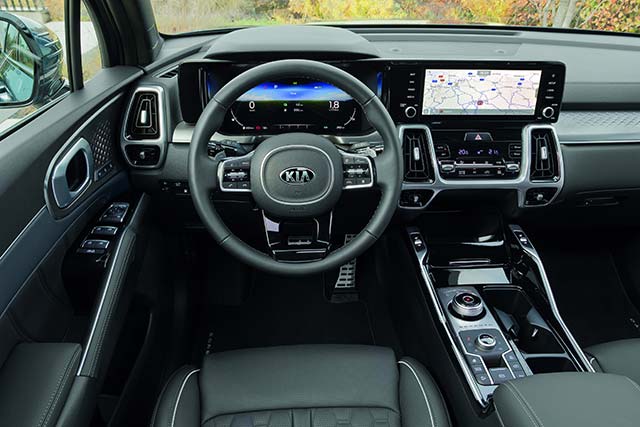 Following the arrival of the self-charging hybrid and diesel versions of the all-new Sorento earlier in the year, Kia Motors (UK) announced prices for the new Plug-in Hybrid variants of its flagship SUV. Available across the Sorento’s entire trio of trim levels, the grade ‘2’ kicks off at £44,995, while the flagship ‘4’ edition is priced at £53,095. Nestling in between is the generously specified ‘3’ variant, which has a price tag of £48,895. All three versions are available to pre-order now from Kia dealers, with the first examples set to reach showrooms early in the New Year.

The Plug-in Hybrid is the second electrified drivetrain in the Sorento line-up and sits alongside the low-emissions Sorento Hybrid. The latest addition to the range blends a powerful 1.6-litre T-GDi Turbocharged Direct injection petrol engine with a high capacity battery pack and high output electric motor, allowing the driver to complete an average daily commute to work purely on all-electric, zero emissions power. And the low CO2 emissions of the all-new Sorento Plug-in Hybrid makes it attractive for business users, thanks to its super low company car Benefit-in-Kind taxation rates.

While many plug-in hybrid vehicles result in compromise, the fourth generation Sorento was designed from the beginning to accommodate electrified powertrains and deliver spacious accommodation for up to seven occupants. The larger body and all-new platform ensure that the latest iteration of the Sorento is one of the most spacious, practical and versatile electrified models on the market today.

With the addition of the Sorento Plug-in Hybrid to the Kia line-up, the company now offers four different plug-in hybrid products, across a variety of different segments. Ceed Sportswagon, XCeed, Niro and now the Sorento seven-seat SUV all offer the capability of zero-emissions driving, with the flexibility of a combined plug-in hybrid and petrol powertrain.

The most powerful model in the range is also the lowest emitting
The combination of a high-power output electric motor, high capacity lithium-ion polymer battery pack and a punchy 1.6-litre T-GDi turbocharged petrol engine results in the most powerful Sorento SUV ever. Power is sent to all four wheels via a newly designed six-speed automatic transmission. The gearbox allows the full power of the engine and electric motor to be harnessed and transferred in parallel, with a minimal loss in energy. The result is highly responsive acceleration, and the lowest CO2 emissions of any model in the Sorento line-up.

The launch of the Sorento Plug-in Hybrid introduces a range of innovations throughout the powertrain that all combine to ensure that it is the most advanced, efficient PHEV to-date from Kia. An independent battery pack water-cooling system makes its debut for the first time in a plug-in hybrid and is designed to ensure optimal heat management and efficiency for the high-voltage battery pack. A new two-stage lamination process for the rotor on the electric motor aims to reduce noise and vibration levels, while the engine itself features Kia’s latest ‘Smartstream’ innovations, including Continuously Variable Valve Duration technology, which regulates the duration that the intake valves open and close, depending on the driving conditions. This innovation allows the powerplant to operate on different combustion cycles, seamlessly optimising both engine performance and fuel efficiency.

The full-size, seven-seat SUV will deliver an equivalent all-electric range (EAER) of up to 57 kilometres (WLTP) from a single charge of its 13.8 kWh battery pack. In urban environments it is capable of travelling up to 70 kilometres on a single charge (EAER city) before its turbocharged petrol engine starts up. Drivers are therefore able to complete many journeys, such as their daily commute, on zero-emissions electric power alone.

Its plug-in hybrid powertrain also promises the lowest CO2 emissions ever offered by the Kia Sorento. With emissions of just 38 g/km (WLTP, weighted combined), the new model is one of the most efficient vehicles in its class.

UK homologated figures will be announced in due course.

Eye-catching design and room for seven in comfort
The fourth generation Sorento is the largest SUV in Kia’s European line-up and features an all-new platform with electrification at the forefront of the bold design. The car’s high-capacity 13.8kWh lithium-ion polymer battery pack is located beneath the driver and front passenger seats. The battery pack is sandwiched between the cabin floor and the Sorento’s underfloor, meaning there is no compromise on space. The Sorento PHEV’s 67-litre fuel tank is located beneath the floor underneath the second row of seats, while the 3.3 kW on-board charger is situated beneath the cargo floor.

Like its self-charging hybrid and diesel stablemates, there’s generous space for seven occupants, as well as offering one of the largest cargo carrying capacities in its class. With all seven seats in use, there’s still 175 litres of space for weekend luggage or shopping, while this expands to an exceptional 809 litres with the rearmost seats folded down flat and the Sorento operating in five-seat mode.

The cabin of the all-new Sorento is arguably one of its biggest attributes, and this remains largely unchanged in Plug-in Hybrid guise. The 12.3-inch fully digital instrument cluster gets a makeover, however, with new graphics and dials to provide drivers with the powertrain’s status. This enables drivers to keep an eye on the battery’s charge status, as well as the flow of electricity and petrol power through the powertrain. From the ‘3’ grade up, the 10.25-inch touchscreen infotainment system has additional functionality to enable drivers to more easily locate vehicle charging points while on the go.

Three comprehensively equipped trim levels
All models in the Sorento Plug-in Hybrid line-up, including the phenomenally specified Sorento ‘2’, feature LED technology for the headlights and rear combination lights, as well as for the daytime running lights, front and rear fog lights and high mounted brake light. 19-inch alloy wheels and a temporary space saver spare wheel are standard equipment, with roof rails not only boosting the all-new Sorento visually, but also adding versatility if there’s ever a need to carry additional loads. A black front radiator grille is married to wheel arch body mouldings and side sills in the same colour, with all versions featuring front and rear skid plates in silver.

Black cloth upholstery is married with light grey headlining to deliver a smart two-tone appearance in the cabin, and the front seats and leather steering wheel are both heated. Seven seats are standard on all editions of the Sorento, including the PHEV, unlike some rivals, with 60:40 split, remote folding and reclining for the second row and a 50:50 split and fold arrangement for the rearmost chairs. USB charge ports are handily provided for all three rows, ensuring that occupants continue to be entertained while on the move, and don’t run out of juice. Dual-zone automatic air conditioning also includes outlets for seats six and seven.

In car entertainment is looked after thanks to DAB radio with a multi-device Bluetooth connection and voice recognition and music streaming, Android Auto and Apple CarPlay smartphone integration. A reversing camera system with dynamic guidelines is integrated into the 8.0-inch touchscreen and includes front and rear parking sensors.

A suite of safety systems features on the all-new Sorento, with seven airbags that incorporates a front centre airbag, in addition to the usual driver and front passenger, twin curtain and pair of front side airbags. Forward Collision Avoidance Assist (FCA) incorporates city, pedestrian, cyclist and junction detection, the latter warning of an oncoming car from the other side of the road when turning at a junction and, if a collision appears likely, applies the brakes to stop the car. The system relies on the front camera and radar and it is dependent upon the indicators being operated, as doing so allows the system to understand the driver’s intent to turn across the traffic.

Move up to ‘3’ specification and the radiator grille gains a more striking glossy black appearance, and a satin chrome finish is applied to the exterior door handles. The LED headlights adopt bi-functionality and privacy glass is included as standard. Inside, the centre fascia adopts a premium etching finish that is both striking and classy. The upholstery is upgraded to black leather, there’s eight-way power adjustment to both of the front seats, and heaters are provided for the outer chairs on the second row. The cabin’s Mood Lighting system allows users to tailor the cabin even further, with the interior illuminated in one of seven pre-set ‘core’ colours, or from a wider range of 64 shades.

The Sorento ‘3’ also includes Kia’s innovative UVO Connect telematics system, connecting drivers by providing invaluable information via the in-car touchscreen and on their smartphone. Featuring Kia Live services and accessible through the uprated 10.25-inch LCD widescreen, the system displays live traffic information, weather forecasts, points of interest, and details of potential on- and off-street parking (including price, location and parking availability). UVO Connect also enables drivers to send route directions to their car before a journey and check the location of their vehicle at any time. A wireless smartphone charger also sits at the base of the centre console.

An engine start/stop button with Smart Entry system adds to convenience, alongside a Smart power tailgate and Highway Driving Assist (HDA), a driving convenience and safety system that reduces driver burden on motorways and A-roads by controlling the vehicle’s steering, acceleration and deceleration functions to maintain the speed set by the driver, keeping a safe distance from the vehicle directly ahead, and positioning the car in the centre of its current lane. Comfort levels are further boosted by the fitment of self-levelling rear suspension.

At the pinnacle of the all-new Sorento range is grade ‘4’, and this flagship model features fine black Nappa leather upholstery with a contemporary black headlining and 10-way power adjustable driver’s seat with electric lumbar support and integrated memory system. There’s ventilated front seats and a panoramic sunroof with tilt and slide functionality and automatic electric roller blind. A head-up display projects driving information onto the base of the windscreen in the driver’s line of sight, with the system displaying alerts from the car’s numerous driver assistance technologies, details of vehicle speed, and turn-by-turn navigation instructions. A powerful 12-speaker BOSE® surround-sound audio system is also included on the top-of-the-range Sorento ‘4’, delivering a more immersive sound to all three rows.

Smart metal pedals deliver a dynamic ambience to the cabin and Blind-spot Collision Avoidance Assist (BCA) helps the driver avoid collisions on busy sections of the motorway. A 360-degree Around View Monitor is incorporated into the 10.25-inch touchscreen and works alongside the Parking Collision-Avoidance Assist (PCA) system. PCA works by preventing the vehicle from colliding with pedestrians or nearby obstacles when the driver parks the car or is reversing out of a parking spot. Using its rear-view camera and rear ultrasonic sensors, if it anticipates a collision, the system warns the driver with visual and audible alarms while engaging the vehicle’s brakes automatically to prevent the collision.

The Kia Sorento Plug-in Hybrid has started production this week at Kia’s Hwasung manufacturing facility in Korea. Like all Kia models, the Sorento PHEV is covered by Kia’s 7-year/100,000 mile warranty. The warranty also covers the car’s electric motor and battery pack.