Renault Z.E. vans help the Food Train to roll into even more destinations 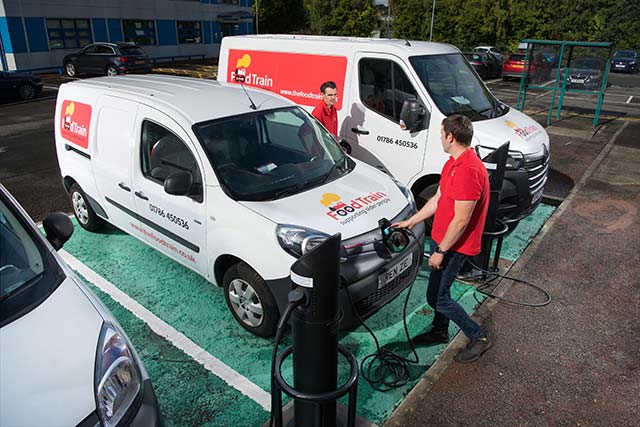 The award-winning Food Train charity is now able to help even more older people in Scotland eat well and live independently thanks to the addition of all-electric Renault Master Z.E. and Renault Kangoo Maxi Z.E. vans to its fleet.

With the arrival of the zero-emissions-in-use Renault vans, the Food Train is now significantly extending the reach of its invaluable service, which sees its volunteers make hundreds of grocery deliveries each week to older people who struggle with shopping through age, ill health, frailty or disability. In addition to its established operations in Dumfries and Galloway, West Lothian, Glasgow, Renfrewshire, Stirling, Dundee and Scottish Borders, and in the latest development in its 25-year history, the charity is now able to expand its coverage to Clackmannanshire and East Renfrewshire.

The 100 per cent electric Renault Z.E. vans have been funded through SP Energy Networks Green Economy Fund, which is administered by the Energy Saving Trust. The fund aims to help local communities benefit from low carbon technology and support the Scottish Government’s energy strategy. As well as its first electric vehicles, the six short-wheelbase Renault Master Z.E. and three Renault Kangoo Maxi Z.E. vans are also the very first brand new vehicles the Food Train has on its fleet, with several replacing aged diesel vans. The availability and the amount of load space were key to the Food Train choosing the Renault Z.E. vans over electric rivals.

Switching part of its fleet to pure electric Renault Z.E. vans has also enabled the Food Train to make its funds go further, generating savings in terms of fuel costs and the increasingly expensive maintenance of several older vehicles.

Importantly, the change has had little impact on the effectiveness of its complex operation, which has seen the charity make 445,000 deliveries in 2019/20 and deliver shopping that was worth over £14 million. The respective WLTP ranges of 75 and 143 miles for the Renault Master Z.E. and Renault Kangoo Maxi Z.E. have proved enough for the rounds, even though the number of drops can vary significantly. To add extra reassurance and enable the charity to reach older people in more remote areas of Stirling, one of the Renault Kangoo Maxi Z.E. vans has been specified with the optional heat pump. Part of the air conditioning system, it produces heat or cools down the vehicle. Acting like reversible air conditioning, it operates in both capacities while preserving the driving range that is available to the Food Train’s volunteers.

Michelle Carruthers MBE, CEO of the Food Train, said: “We are delighted that our new vans are allowing us to operate in a more environmentally friendly way and support the Scottish Government’s climate change and air quality targets. However, even without the environmental benefits they make sense for us operationally. They take the constant stopping and starting during our rounds in their stride and the Masters swallow the delivery boxes with room to spare, while the Kangoo has more than enough space for a full delivery.

“For most of our volunteers, most of whom are retired, the Renault Z.E. vans are their first experience of driving and charging an electric vehicle. Some were a little wary at first, but feedback has been great, and they really enjoy the relaxed drive and comfort, with some also going so far as to explore the benefits of the regenerative braking system.”

Vincent Tourette, Managing Director, Groupe Renault UK, added: “It’s fantastic to see the positive impact that the Renault Master Z.E. and Renault Kangoo Z.E. are having on the Food Train and the older people it helps. It’s another excellent illustration of how usable the all-electric Renault PRO+ range is and how it can allow organisations to enjoy environmental and financial benefits with no detriment to their everyday operations, whether they are working in urban or more remote regions.”

The Renault Master Z.E. is available in a variety of body styles and, dependent on the version, weights of 3.1T and 3.5T. It offers a payload of up to 1,425kg in Panel Van format and can also be specified as a Chassis Cab or Platform Cab, these two versions forming the basis for several factory ‘off-the-shelf’ conversions and those available across the brand’s network of 150 dealerships. With a 33kWh battery, it provides an all-electric range of up to 75 miles (WLTP). When powered by a 7kW wallbox, a full charge is capable in as little as six hours. The Renault Master Z.E is priced from £46,900 plus VAT after the Plug-in Van Grant.

The Renault Kangoo Z.E. can be specified in three body styles (Panel Van, Maxi Panel Van and Crew Van) and offers a load area of up to 4.6 cubic metres, depending on the model. It offers a potential range of up to 143 miles (WLTP) and can be charged to 100 per cent in six hours when using a 7kW wallbox. The Renault Kangoo Z.E. costs from £19,380, excluding VAT, after the Plug-in Van Grant.

Renault PRO+ now offers the widest range of all-electric commercial vehicles of any manufacturer. In addition to the Renault Master Z.E. and Renault Kangoo Z.E, it also encompasses the newly launched Renault ZOE Van, which combines the equipment and 245-mile range of the passenger car version with a versatile payload of 387kg (Business trim). The Renault ZOE Van comes with a five-year/100,000-mile warranty and an eight-year/100,000-mile battery guarantee, while the other vans in the range come with the reassurance of a standard three-year/100,000-mile warranty, with a battery guarantee of five years/60,000 miles.