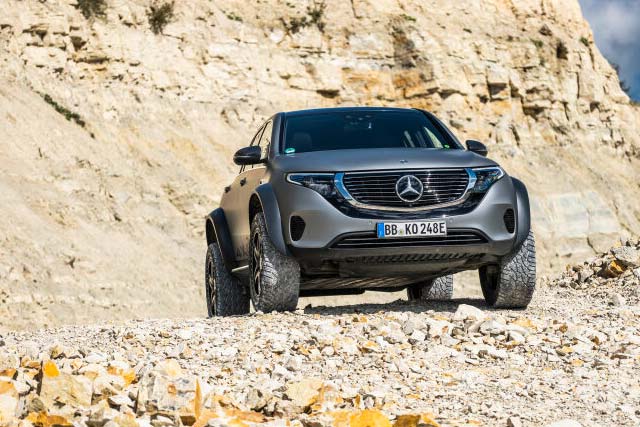 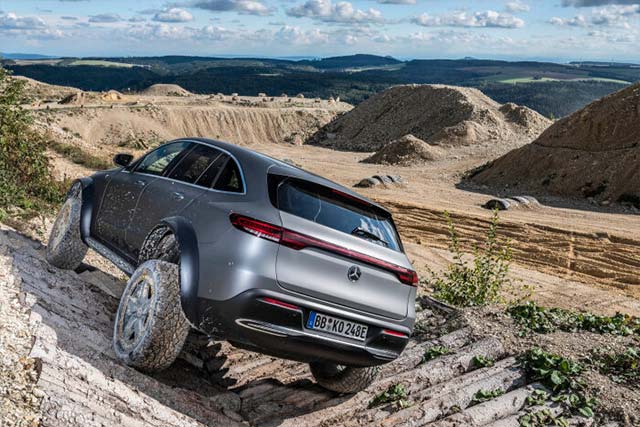 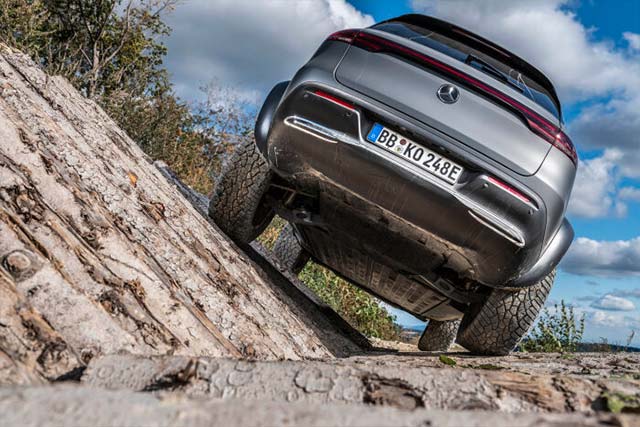 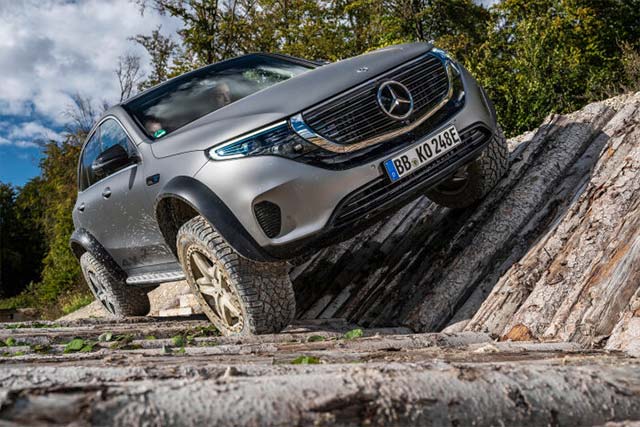 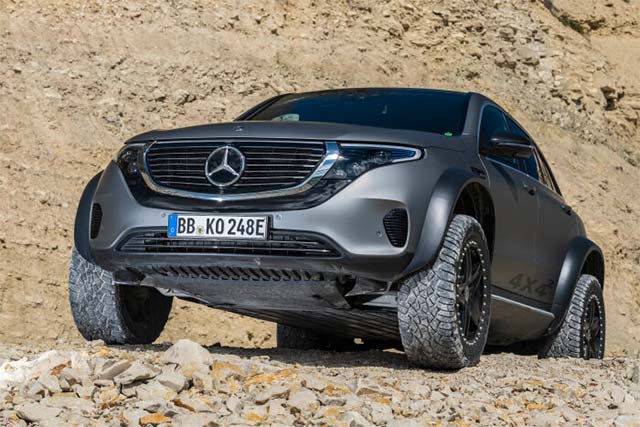 Emotive appearance, sure-footed on rough terrain and with future-oriented technology: the EQC 4×4² shows that electrification at Mercedes-Benz already goes farther than the road network. A small team of dedicated developers has created this drivable technology platform on the basis of an EQC 400 4MATIC. The technical highlights include the multi-link portal axles as well as the production of a powerful sound in the interior and exterior. The headlamps turn into “lampspeakers”, because they also function as a loudspeaker at the same time.

The EQC 4×4² is an electric car of extremes. Mercedes-Benz wishes to test the limits with this vehicle, and show that e-mobility is not just urban, but also conceivable off-road. The one-off was developed by a cross-departmental team under development engineer Jürgen Eberle which has already put the E 400 All-Terrain 4×4² on its studded wheels. “Our aim is to combine modern luxury and sustainability with emotional appeal. The EQC 4×4² shows how enjoyable sustainable mobility can be. This is where electromobility high-tech and an intriguing customer experience are transferred to the mountains, thanks to MBUX and over-the-air updates. To put it succinctly, electric, progressive luxury goes offroad,” says Markus Schäfer, member of the Board of Management of Daimler AG and Mercedes-Benz AG responsible for Daimler Group Research and Mercedes-Benz Cars COO. “This drivable study clearly shows that alongside a passion for e-mobility, we at Mercedes-Benz lay a strong claim to leadership in this sector and will heighten the emotional appeal of this even further in the future.”

With the EQC 4×4² as a technology platform, Mercedes-Benz is demonstrating that love of adventure can be combined with lifestyle and sustainability. Its capabilities include driving through sand in desert regions and on beaches, on rocky terrain and through mountain streams. As well as great reliability and corresponding comfort, the mature genes of the standard model also allow trailer operation and installation of a roof-rack. A roof-tent and inflatable dinghy allow the remotest areas to be reached – and when making an early start, the other adventurers in the camp will not even be woken up.

At 293 millimetres, the EQC 4×4² rides more than twice as high as a production EQC (140 millimetres). Even a G-Class rides 58 millimetres lower. The fording depth is increased by 15 centimetres, to 40 centimetres. The tremendous ground clearance is made possible by the conversion to portal axles: unlike conventional axles, the wheels are not at the height of the axle centre, but are instead situated much lower down on the axle hubs owing to the portal gears. Or conversely, the entire vehicle moves up. The 4×4² suspension is attached to the same body mounting points as the standard suspension.

Just as impressive are the approach and departure angles – 31.8 degrees at the front and 33 degrees at the rear. By way of comparison, a conventional G-Class has an approach and departure angle of 28 degrees. The reprogrammed
Off-Road drive programs take advantage of the high-performance logic of the current GLC models. For example, using targeted brake interventions, this enables an improved torque curve when starting on loose ground. In combination with the tyres in size 285/50 R 20, this results in an impressive sure-footedness in terrain. The striking visual appearance is rounded off by the  matt metallic gun-metal grey car film and the black wheel arch flares.

Here are the key off-road data at a glance:

Another highlight of the EQC 4×4² is the sound experience with its own soundscape. The acoustic production comprises sounds that give the driver feedback on system availability and vehicle parking, as well as an interactive, emotionalising driving sound. It is influenced by various parameters such as the position of the accelerator pedal, speed or energy recovery rate. The technology uses intelligent sound design algorithms to calculate the sounds coming from the amplifier of the sound system in real time and the interior loudspeakers to reproduce them.

The production EQC uses the external noise generator (Acoustic Vehicle Alert System, AVAS) required by law to reproduce the sounds. The EQC 4×4² has a more powerful AVAS composed specifically for it and uses the headlamps as external speakers for this purpose. The reason being that the sound experts of Mercedes-Benz have made creative use of the available installation space in the headlamp housings – the “lampspeaker” was born.