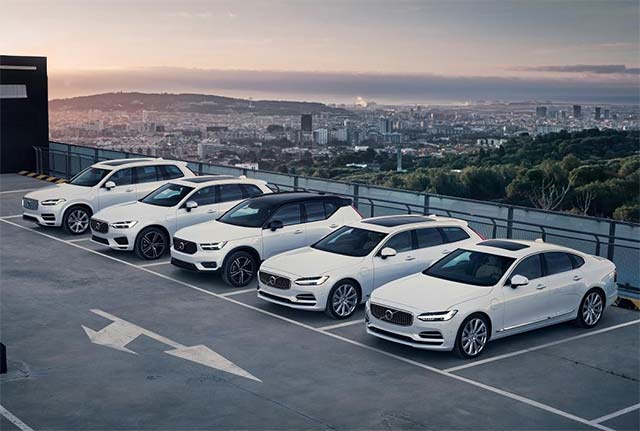 Volvo Car UK has extended its innovative Take Charge electricity offer, which allows buyers of new plug-in hybrid cars to benefit from a year’s reimbursed electricity to charge their car. The offer applies to every plug-in hybrid model in the Volvo range, from the funky XC40 premium compact SUV to the luxurious seven-seat XC90.

Volvo’s aim is to encourage drivers to make full use of their car’s electric power, thereby maximising the potential fuel and emissions savings the technology allows. By plugging in their car as often as possible to ensure the hybrid system’s battery is kept charged, customers are always able to travel on electric power, reducing petrol consumption and tailpipe emissions on every journey.

Analysis by Volvo has shown that plug-in hybrid customers are already adopting an eco-conscious approach to driving, with owners in Europe using their car in Pure mode – which priorities electric-only operation to maximise driving on battery power – for 40 per cent of the time.

How the offer works

The electricity costs for charging the car will be calculated from June 2020 and repaid to customers at the end of the 12-month period, based on a third-party-provided average cost of electricity in the UK. How much electricity each customer uses will be monitored via the Volvo On Call app, which also allows the driver to monitor the charge status of the car’s battery via their mobile device.

The offer is open to both private and business customers. Since Volvo’s intention is to encourage drivers to get into the habit of regularly plugging in their car to keep its hybrid battery charged, it is the company car driver who will receive the refund at the end of the year as opposed to their employer.

Volvo leads the UK market in offering a plug-in hybrid version of every model in its range, so the Take Charge offer applies to all Volvo customers, no matter which model they are interested in.

The newest addition to Volvo’s plug-in hybrid range is the XC40 Recharge Plug-in Hybrid. Combining a 180hp petrol engine with an 82hp electric motor, it offers CO2 emissions from just 47g/km and official fuel economy of up to 134.5mpg (WLTP Combined cycle). Its high-voltage battery also allows it to travel up to 27 miles on electric power alone, making it possible to complete many journeys without using a drop of petrol.

The reimbursed electricity offer is just part of Volvo’s wide-ranging plans to reduce the lifecycle carbon footprint of all its new cars by 40 per cent by 2025. The introduction of electrified powertrains – including full battery electric in the recently announced XC40 Recharge Pure Electric – will help Volvo bring down the overall tailpipe emissions of its cars by 50 per cent by 2025. Other short-term ambitions include a 25 per cent reduction of CO2 emissions related to its global supply chain by 2025, and a 25 per cent reduction of carbon emissions generated by the company’s overall operations, including car production and logistics. These targets all go towards Volvo’s goal of becoming a climate-neutral business by 2040.

Kristian Elvefors, Volvo Car UK Managing Director, said: “Sustainability is crucial at Volvo, and that involves helping everyone to do what they can to drive in the most environmentally friendly way possible. The extension of our Take Charge offer allows us to cover a year’s electricity charging costs for even more plug-in hybrid customers, helping them make the most of their new car’s electric potential, and saving them money along the way.”