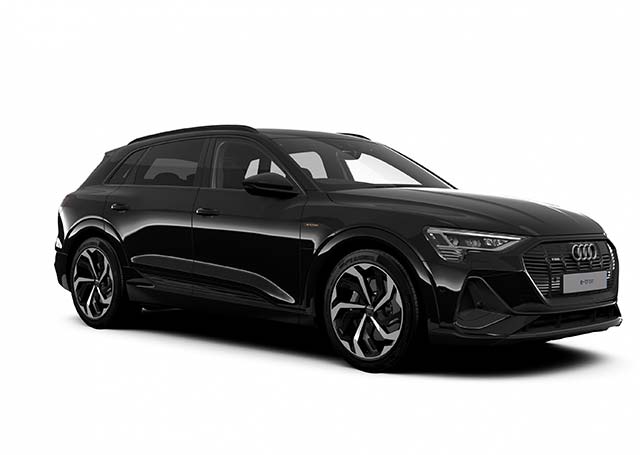 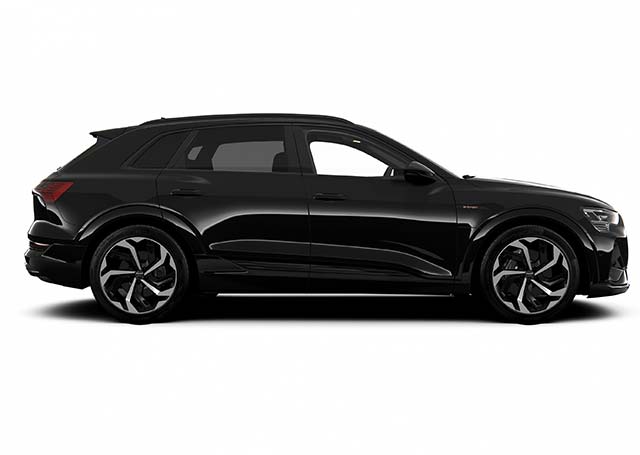 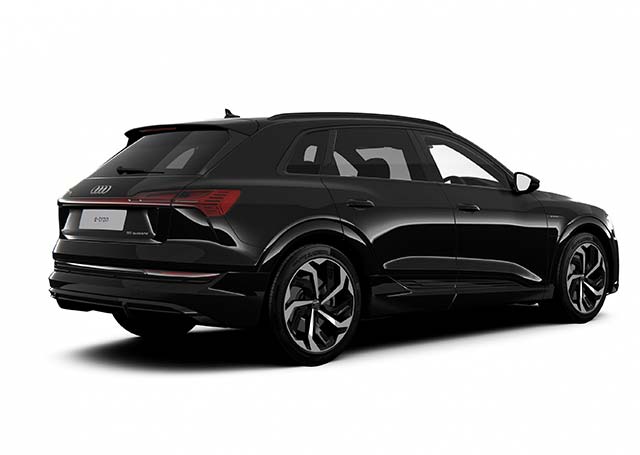 Audi is redoubling its efforts to streamline the process of switching to its fully electric e-tron SUV and e-tron Sportback models at every level, and this includes the all-important pre-ordering selection stage, which has just been further simplified.

Specification structures have been brought into line for the 50 and 55 versions of the e-tron SUV, and they now include newly introduced Black Edition and Vorsprung options that offer a direct, one-stop route to the most sought-after items of equipment favouring visual impact, technological sophistication and luxury.

The range-topping Vorsprung specification also becomes available for the e-tron Sportback, and in both applications includes the latest digital matrix LED lighting technology. The digital element in the cabin across all trim lines has also been enhanced by an upgrade to the new third generation modular infotainment platform or MIB 3, which offers ten times more processing power than its predecessor and facilitates new capabilities such as wireless connection to the Audi Smartphone Interface.

The first all-electric Audi – the e-tron SUV – is available in 50 quattro form with a WLTP-certified range of up to 195 miles, or with a larger battery as the 55 quattro capable of travelling for up to 247 miles between charges. Each of these options can now be combined with a choice of five trim lines – Technik, Sport, S line and the new additions Black Edition and Vorsprung.

All include features such as alloy wheels of at least 20 inches in diameter, adaptive air suspension, LED lighting, the Audi Virtual Cockpit and the touch-screen MMI Touch system with its dual monitors. The MMI system can be controlled either by a fingertip or via voice control, and has been further enhanced for this latest generation model through the integration of the considerably more powerful, third generation MIB 3 modular infotainment platform. It can now access speech recognition software in the cloud during its formulation of responses to spoken commands for even more accurate comprehension and feedback. Phone book contacts can also be accessed vocally, as can a radio station or a track from the media library, and the system can now produce text messages via dictation. Even the climate control now responds to the spoken word.

The revised e-tron range is now available to order now priced from £59,900.

Thanks to the more sophisticated MIB 3 processor, the navigation system itself becomes more intelligent as well. It has the ability to learn the driver’s habits, meaning that during route planning it can make suggestions based on previously-driven routes, taking into account the time and traffic congestion, and can even now provide lane-by-lane information on traffic flow. Routes are calculated online on the servers of the service provider HERE, which uses data from the overall traffic situation. In the interest of optimal route guidance accuracy free over-the-air map updates are also now available to e-tron drivers on a monthly basis.

Drivers of all versions of the e-tron also have the option to display and control navigation and infotainment apps from a smartphone on the central MMI monitor using the standard Audi Smartphone Interface, and as an additional benefit of the upgrade to MIB 3 connection can now take place wirelessly.

The starting point for the new Black Edition specification in the e-tron SUV is the S line with its dedicated S line exterior styling treatment, privacy glass, matrix LED headlamps and LED rear lamps. Both models sit lower on sport air suspension, their arches amply filled by 21-inch Audi Sport wheels, but the Black Edition is distinguishable by its gloss anthracite black wheel design, which coordinates with the Singleframe, front and rear bumper inserts, window trims, roof rails and door mirror surrounds, all of which are also finished in black.

Even more imposing 22-inch Audi Sport alloy wheels with a matt titanium finish frame orange brake calipers in the new flagship e-tron Vorsprung, and its slim virtual door mirrors also mark it out. They house high definition cameras that transmit images of the SUV’s surroundings to OLED displays on each side of the cabin. They can be replaced by conventional door mirrors if preferred.

Another external asset that is new to the updated e-tron range and forms part of the Vorsprung specification is digital matrix LED lighting. The ultra sophisticated digital matrix LED units, which represent a world first for Audi in a production car, project high resolution light that is broken down into minute pixels thanks to a small chip containing one million micromirrors, each of which measures just a few hundredths of a millimetre at its edge. With the help of electrostatic fields, each individual micromirror can be tilted up to 5,000 times per second either to direct LED light via the lenses onto the road or to absorb it in order to mask out areas of the light beam to avoid dazzling oncoming traffic.

In the e-tron and e-tron Sportback Vorsprung models, the digital matrix LED units also offer innovative functions such as lane light and orientation light. On multi-lane carriageways, the lane light creates a carpet of light that illuminates the driver’s own lane brightly and adjusts dynamically when he or she changes lane as an additional aid to road safety. The orientation light supports the lane departure warning system, using darkened areas masked out from the light beam to predictively show the vehicle’s position in the lane. The new units can also generate dynamic leaving-and coming-home animations that appear as projections on a wall or on the ground, and can deliver cornering, city, and highway lighting with exceptional precision.

Virtually every driver assistance system currently available in the Audi portfolio is at the e-tron Vorsprung driver’s disposal as well. With the help of its 360-degree camera and network of sensors, its Tour and City Assist packs bring together everything from adaptive cruise assist and the predictive efficiency assistant facilitating the most charge-conscious driving style to monitors for turning at junctions, blindspots, lane keeping, reversing out of parking spaces and even stepping out of the e-tron onto a busy road when parked.

From its electrically adjustable, heated steering wheel and diamond-stitched super sport seats to its 19-speaker Bang & Olufsen audio system, and from its powered door closure to its head-up display, the e-tron Vorsprung is also a thoroughly indulgent choice. As befits the standard bearer for luxury and technology in the range, a number of options are now exclusively reserved for this version as part of the latest rationalisation.

Launched earlier in 2020 to stand alongside the first e-tron SUV, the e-tron Sportback combines the power, presence and space of the lead model with a more sporting silhouette referencing coupé design. In common with the e-tron SUV its debut has been marked by the inclusion of a special edition – the Launch Edition – in the UK range, and as its introductory phase is still in progress that version is carried over.

Launch Edition trim sits above S line, which in recognition of the Sportback’s design and positioning is the entry point in this range, and combines visual elements from the Black Edition specification with a selection of the luxury components and driver assistance features offered by the Vorsprung SUV, including its virtual mirrors. Above it, the new e-tron Sportback Vorsprung features the same voluminous list of luxuries and innovative technologies as its SUV counterpart. As the more performance-oriented member of the e-tron duo the Sportback offers all these trim options exclusively in conjunction with the larger 95kWh battery denoted by the ’55’ designation.

As further evidence of its commitment to simplification of the EV ownership proposition, Audi has launched the new e-tron Charging Service to streamline the process of charging the e-tron models publicly. Subscribers to the service receive one RFID payment card that is accepted at a vast number of charge points operated by 18 suppliers across the UK and Europe, and have a choice of two attractive fixed price charging tariffs. With a single tap of the card their account is automatically debited based on usage, and all transactions appear on the one simple invoice they receive each month.

UK fleet and retail customers who place an order for an e-tron model before December 31st 2020 will receive a free 12-month subscription to the e-tron Charging Service and an account credit equivalent to 1,000 miles-worth of electricity at no extra cost.

Regardless of the model chosen, a recharge of an e-tron model can be completed to the recommended 80 per cent capacity in as little as 30 minutes at fast charge stations thanks to the 120kW and 150kW charging capabilities of the 50 and 55 models.

Alternatively, the battery is of course rechargeable at home using AC charging, and a 7kW home wall box charger is currently available to all fleet and retail customers placing an e-tron or e-tron Sportback order before December 31st at no extra cost. It can complete a full charge of the e-tron 50 quattro in around 10.5 hours, and needs around 14 hours to replenish the 55 quattro models.

By downloading the myAudi app, the driver can activate and deactivate charging remotely and also define a home charging schedule that takes advantage of cheaper off-peak electricity supply periods.

The my Audi app also provides access to the remote preconditioning system which is another standard feature of e-tron models. Using the app the driver can activate the car’s heating and ventilation unit from a smartphone to cool or heat the cabin well before a journey begins. In Vorsprung versions, an upgraded comfort remote preconditioning system also enables full adjustment of the cabin temperature and can control the seat, steering wheel and window heating functions.

Further down the line, when the time comes for servicing, fleet and retail customers placing an e-tron order through either the Personal Contract Plan (PCP) or Contract Hire channels before December 31st can benefit from another gesture by Audi designed to make life a little easier – a Level 2 Service Plan covering their first two services will also be included as part of their finance agreement at no extra cost.