There are now 200,000 plug-in electric vehicles on the Netherlands roads 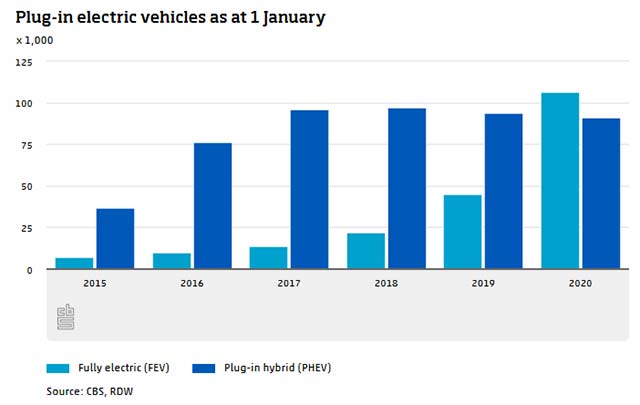 This is reported by Statistics Netherlands (CBS) on the basis of registration data from the Netherlands’ Vehicle Authority (RDW).

At the beginning of this year, 2.3 percent of the total passenger car fleet in the Netherlands were plug-in cars. This was still 1.6 percent in 2019.

Plug-in electric vehicles have seen a steady rise for years. In 2019, the increase was entirely on account of the FEVs: from 45 thousand in January 2019 to 107 thousand in January 2020. PHEVs declined in number: from 94 to 91 thousand. Substantial growth was recorded in the plug-in hybrid segment as of 2015, but this levelled off in 2017. As of January 2017, the additional tax liability for PHEVs was raised to 22 percent.

Peak in new sales in December 2019

Over 82 percent of FEVs are driven for business purposes, against 12 percent of all passenger cars. Electric company cars are subject to lower additional tax rates than conventional company cars. In 2019, the additional tax liability amounted to 4 percent. This went up to 8 percent as of 1 January 2020. In December 2019, just before the new regulations took effect, the sale of new electric cars peaked at 22.9 thousand. December sales were higher than in the five preceding months combined. Altogether nearly 63 thousand new FEVs were sold in 2019. This amounted to nearly 25 thousand in 2018.