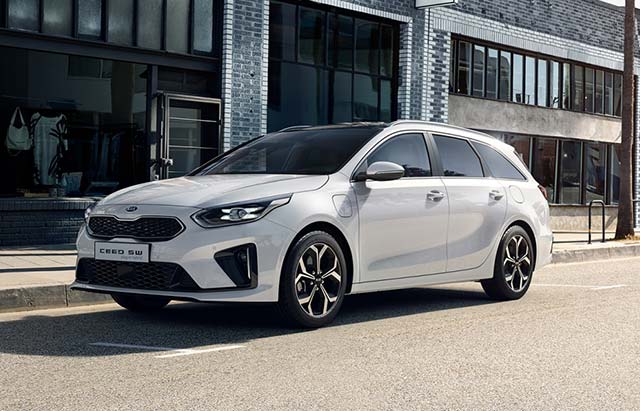 The introduction of the Plug-in Hybrid variant to the Kia Ceed Sportswagon range marks the next step in Kia Motors’ vehicle electrification strategy. Now on sale at UK showrooms, the Sportswagon PHEV is the first time Kia has brought electrified powertrains to the Ceed family.

Available to order now, the Sportswagon PHEV is priced at £29,995 in its sole 3 trim level.

The plug-in hybrid version of the Ceed Sportwagon has its own distinctive design features to differentiate them from other petrol and diesel models in the line-up. A new closed ‘tiger-nose’ grille at the front of the car is designed to aid aerodynamic efficiency, while the charging port is integrated into the passenger side front wing. More dynamic-looking bumpers from the Ceed Sportswagon GT-Line models aid air flow and provides a sportier overall appearance, and completing the alterations are ‘eco plug-in’ exterior badges.

The Ceed Sportswagon was designed at the brand’s European design centre in Frankfurt, Germany, under the direction of Gregory Guillaume, European Head of Design, and Peter Schreyer, President of Design and Chief Design Officer. Carrying over the sporty, emotional design character of the Stinger, the Ceed Sportswagon conveys a more self-confident new look – one that is both emotive and precise in its execution. 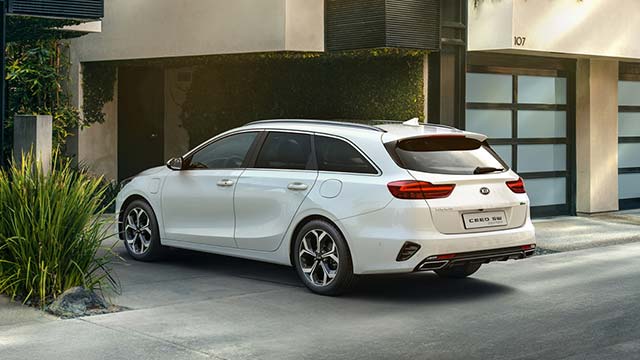 Lower, wider, and with a longer rear overhang than the car it replaces, the Ceed Sportswagon’s cab-rearward silhouette exhibits a more mature sense of athleticism. Straight lines replace the rounded-off edges of its predecessor, evolving the front of the car with a wider ‘tiger-nose’ grille and lower air intake, and precise, linear shapes framing its ‘face’. The new model features LED daytime running lights as standard, echoing the appearance of earlier cee’d GT and ‘GT-Line’ models.

In profile, the sharp, straight lines visually lengthen the bonnet. A greater sense of maturity and strength is created in its shoulder line, which now runs along a more horizontal plane. The model adopts the wide C-pillar that has become a hallmark of Kia design in recent years, enhancing its cab-rearward stance. This also gives the upper window-line a sleek new ‘half-moon’ shape. At the rear, LED daytime running lights give the Ceed Sportswagon greater visibility – and recognition – on the road. Paired with straight lines in the bodywork and a subtle rear boot spoiler, the car presents a more stable overall appearance.

Constructed on Kia’s ‘K2’ platform and sharing near-identical dimensions to the five-door hatchback, the Ceed Sportswagon is 20mm wider (1,800mm) and 20mm lower (1,465mm) than the outgoing model. Its wheelbase remains the same at 2,650mm, with the front overhang shortened by 25mm (to 885mm), and rear overhang extended by 115mm (now 1,070mm). Extending the straight lines of the bodywork, and capped with a subtle tailgate spoiler, the Ceed Sportswagon joins its five-door hatchback sibling in presenting a stable, sporty aesthetic. The PHEV model boasts a 437-litre (VDA) boot. Compared to its predecessor, there is greater shoulder room for rear passengers, more headroom in the front row, and a lower driving position. By folding the rear seats down, the generously sized cargo space can be extended to 1,506 litres (VDA).

Inside, the sporty cabin design retains the same driver-oriented dashboard, low seating position and everyday ergonomics of the existing Ceed Sportswagon. However, the new Plug-in Hybrid model features a range of new functionalities to enhance usability for owners looking to extract the most out of the new powertrain.

The Ceed Sportswagon PHEV are equipped with a charging indicator, a visual aid to tell owners that their car is charging or when the battery is fully charged. Its location on top of the dashboard means drivers can instantly ascertain the car’s state of charge at a glance from outside the car (for instance, when it is parked on their driveway at home and the owner hasn’t left the house yet). 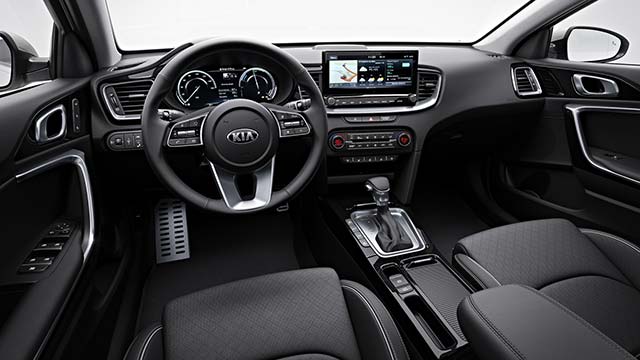 The ‘Driver Only’ heating, ventilation and air-conditioning system – activated with a new button on the dashboard – instantly deactivates airflow to all cabin vents except those nearest the driver. This is designed to reduce the draw on battery energy from the ventilation system, while still keeping the driver at their preferred temperature. Unlike conventional ventilation systems, Kia’s ‘Driver Only’ system doesn’t simply restrict airflow to certain vents, rerouting it elsewhere; instead, it switches off the fans themselves, reducing energy use at source.

The Ceed Sportswagon’s interior is more ergonomic than ever, and with higher-quality materials used throughout. The cabin architecture from the most recent Kia vehicles has been adapted for the Ceed, with the dashboard laid out horizontally for a more sculptural, seamless and slimline appearance. This design also creates greater space and a sense of openness for the front passenger, creating more room in the footwell and a clearer view ahead.

The dashboard is split into an upper area – for the ‘floating’ touchscreen infotainment system – and lower area, housing controls for audio and heating and ventilation. Driver-centric in its layout, the centre console is angled slightly towards the driver’s seat for ease of use on the move. The interior is finished in a higher proportion of sophisticated soft-touch materials throughout, subtly intensifying the refined and upscale ambience of the cabin. Surfaces are finished with satin chrome trim, together with cloth and faux-leather upholstery. A leather-wrapped steering wheel and gearstick is standard, too.

Like its petrol and diesel counterparts, the Ceed Sportswagon Plug-in Hybrid has been engineered exclusively for European roads, with European buyers in mind. The ride and handling characteristics have been tuned to elevate them in terms of dynamism and driver engagement.

The fully independent suspension system provides drivers with agile and immediate handling responses. The ride has been developed on Europe’s wide variety of road surfaces, remaining comfortable while giving drivers the confidence of close body control under cornering and maximum stability at higher speeds. The suspension and steering have been subtly tuned compared to petrol and diesel versions of each car. These updates ensure each vehicle retains the same driving character of their conventional counterparts, while accommodating the different weight distribution of the powertrain.

Technology in the Ceed Sportswagon also plays a role in enhancing driver enjoyment, as well as safety. The front-wheel drive car features Electronic Stability Control (ESC) and Kia’s Vehicle Stability Management (VSM) system as standard. This enables the inclusion of Torque Vectoring by Braking technology, an additional electronic driver support feature which intelligently brakes the inside wheels to reduce understeer around corners – making the Ceed Sportswagon PHEV more enjoyable and confidence-inspiring to drive.

Refinement and the suppression of noise, vibration and harshness (NVH) was a principal focus during the Ceed Sportswagon’s development. Engineers analysed every element of cabin, engine and suspension insulation and ‘transfer paths’ for NVH. Compared to the outgoing cee’d, the new model features thicker, more insulating dashboard padding, new, more sound-absorbent insulation around the rear wheel arches, and a new insulation layer beneath the cabin carpet, reducing engine and road noise. Reshaped windscreen side mouldings and new, more comprehensive sealing around the doors have led to a reduction in wind noise. The Ceed Sportswagon is therefore quieter than its predecessor at every engine speed.

The chassis and bodyshell also contribute to lower levels of vibration from poor road surfaces. A thicker rear crossmember and additional reinforcement beneath the rear cabin and boot floors reduce the effect of vibrations from the rear axle. New anti-vibration pads are also fitted to the upper cowl, at the base of the windshield, reducing the effect of engine vibrations on the cabin.

The powertrain is paired with a six-speed double-clutch transmission (6DCT), allowing drivers to shift gear for themselves, ensuring a more enjoyable drive than other hybrid vehicles equipped with electronic continuously variable transmissions (e-CVT). Traditional e-CVT hybrids convert a portion of engine output through the electric motor, resulting in power losses from energy conversion. Kia’s 6DCT differs by allowing the full output of both the engine and motor to be transferred in parallel through the transmission, with minimal loss of energy.

The Ceed Sportswagon PHEV ‘3’ model is capable of travelling up to 29.2 miles on zero-emissions electric power. This capability enables drivers to complete the majority of daily drives and short commutes on electric power alone. Recharging the battery pack using a 3.3kW charger takes 2.15 hours.

Equipped with 17-inch alloy wheels, the Ceed Sportswagon PHEV ‘3’ model emits just 33g/km of CO2 and achieves a combined drive cycle figure of 188.3mpg under the latest WLTP regulations. It has a maximum speed of 106mph and can complete the 0-60mph dash in 10.5 seconds.

Kia’s new Virtual Engine Sound System is included, which comprises an audible warning system which activates in electric-only mode at low speeds or when reversing. The system generates virtual sound levels of up to 59 dBA to safely notify pedestrians of the car’s presence.