Volkswagen guarantees a minimum battery capacity of 70% over eight years or 160,000 km 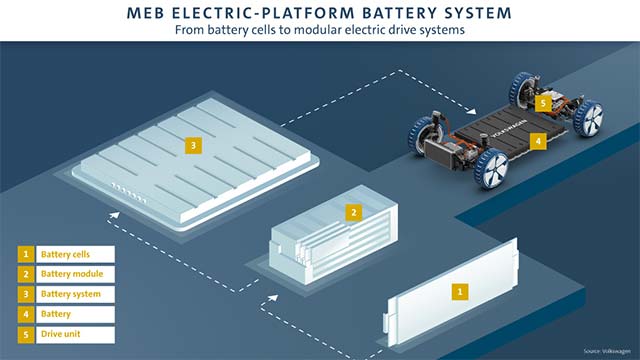 The battery is considered the heart of modern electric cars. In an interview, Frank Blome heads the Battery Cell business unit at Volkswagen Group Components explains how the modular electric drive matrix (MEB) works and what progress can be expected in battery technology.

In the electric age, the battery system is a key factor for the competitiveness of car manufacturers. How do you assess Volkswagen’s position?

I am convinced that with new models such as the ID.3 we will benefit greatly from our modern electrical platform, the MEB. For the first time, we have had the opportunity to develop the vehicle practically around the battery, so that there is plenty of space for the energy storage device. The result is; ranges of between 330 and 550 kilometers at affordable prices. The MEB is a decisive plus point.

Why are there different ranges for a battery system?

We give the customer the opportunity to choose between different variants and consequently also influence the price of the vehicle. This is made possible by the modular design of the MEB: With a standardized architecture, we have the option of accommodating a different number of storage modules in the underbody of the vehicle. This standardization allows us to produce battery systems very efficiently and flexibly.

You know it from smartphones – at some point the performance of the battery begins to deteriorate. What about the car?

Our batteries should, of course, last the lifetime of a car – and that is considerably longer than the service life of most phones. We guarantee a minimum battery capacity of 70 percent over eight years, or 160,000 kilometers. Similar to smartphones, customers can also influence the battery’s durability. Rule of thumb: Normal charging is gentler than quick charging. And: If one charges the battery to only 80 percent instead of 100 percent, you can also increase its service life. In most everyday situations, this is quite sufficient.

In the case of e-vehicles, the battery sometimes accounts for 40 percent of the added value. How do you organize the recycling of the materials?

Volkswagen assumes responsibility for the entire battery raw material cycle. All activities from battery cell production to recycling are bundled at Volkswagen Group Components. Batteries are not hazardous waste, but a valuable source of raw materials. The aim is to achieve the highest possible level of material recycling and the reuse of valuable E-raw-materials such as nickel, manganese, cobalt as well as copper, steel and aluminum – in an ecologically and economically sustainable manner. At the end of its life cycle, the battery is repaired as far as possible, used for a second use in new products such as flexible quick charging stations and then recycled.

Volkswagen Group Components is working on a recycling concept to return raw materials to the manufacturing process chain. A pilot recycling plant is currently being built at the Salzgitter site, where recycling processes, already being researched, are being validated and scaled up. The pilot recycling plant is initially designed for up to 1,200 tons of batteries per year. This corresponds to around 3,000 battery systems per year. Larger quantities of battery returns are not expected until 2030 however.

What advances in battery technology are emerging?

We are continuously working on further improvements – especially in terms of cost, range and charging times. I expect that we will be able to significantly reduce charging times and increase energy content from around 2024 onwards by using silicon anodes. We will probably achieve the next big leap with the solid-state battery. Together with our partner QuantumScape, we are working intensively to bring them to market maturity.

Volkswagen is building up its own battery cell production in Salzgitter. What does the timeline look like?

Together with our joint venture partner Northvolt, we plan to start production at the beginning of 2024, with the battery factory having an annual capacity of 16 gigawatt hours. An option to increase to 24 gigawatt hours is being considered in the building application. Our Center of Excellence is also already operating in Salzgitter. Here, around 300 experts are developing innovative production processes, for instance for lithium-ion batteries.