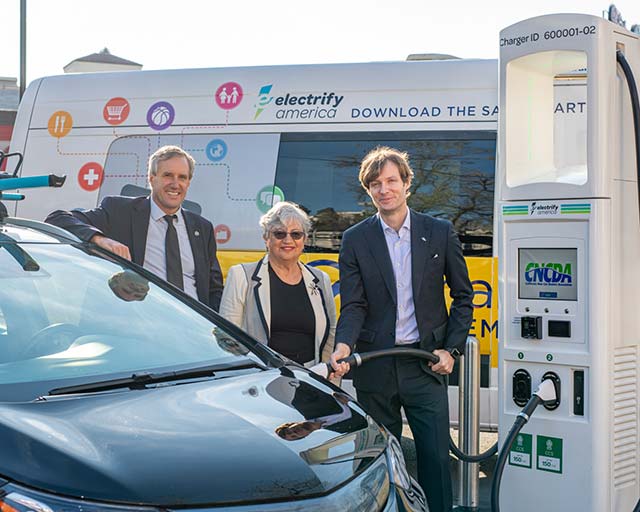 Drivers across the state of California now have access to 100 Electrify America EV charging stations, making it easier than ever to power up their electric vehicles on the go. The network opened its milestone 100th station to the public this February, formally announcing the accomplishment at Wednesday’s Veloz ‘Electric Transportation 2030’ forum.

Electrify America opened its first EV charging station in California to the public in November 2018, at the Country Hills Shopping Plaza in Torrance. Fifteen months later, its ultra-fast brand-neutral charging network now offers charging locations spanning the full length of the state, from San Diego to Crescent City. The Sacramento region is home to 14 of those stations with 64 individual chargers.

“We have made significant progress in our efforts to provide greater access to quality EV charging infrastructure across the state of California,” said Giovanni Palazzo, president and chief executive officer of Electrify America. “With the supportive guidance of the California Air Resources Board and ongoing collaboration with public and private stakeholders, we will continue to make thoughtful investments in zero emission vehicle infrastructure and educational initiatives to promote electric driving and help the state move closer to achieving its long-term environmental goals.”

California is one of the largest markets in the world for zero emission vehicles (ZEVs), and Electrify America’s local investments in infrastructure and education programs are designed to support the state’s steadily increasing adoption of EV technology. Electrify America is in the middle of its second $200 million investment in the state; the company is committed to a total investment of $800 million over a ten year period.

A strong emphasis is placed on how Electrify America’s efforts in the state can benefit low-income and disadvantaged communities. In the San Joaquin Valley, a region with some of the worst air quality and most severe poverty in the nation, Electrify America’s funding helped Valley Clean Air Now triple their average annual adoption rate of plug-in vehicles via the Clean Cars 4 All vehicle replacement program. Just last week, Electrify America announced its plans to deploy 100% solar-powered Level 2 chargers across rural areas of California to increase access to EV charging.

“Electrify America is paving the way for the millions of new battery electric vehicles that will be hitting the roads of California in the next few years,” said Mary D. Nichols, chair of the California Air Resources Board (CARB). “Whether you own a car, hail a ride, or take a bus, this 100th station spells out a welcome to all to be part of the zero emissions transportation revolution.”

Electrify America’s investments in California include:

– EV CHARGING SOLUTIONS – Electrify America continues to focus on bringing reliable, convenient, and brand-neutral EV charging infrastructure to locations across the state. In addition to providing ultra-fast chargers in heavily trafficked areas with high concentrations of EVs, the company is also responding to the need to provide innovative charging options that meet the needs of rural communities and lessen the impact on the local electrical grid.

– DC Fast Charging Stations – Electrify America’s ultra-fast charging stations have a range of power from 50 kilowatts (kW), which is most commonly used in today’s electric vehicles, to 150kW and 350kW. This future-proof, ultra-fast charging technology can meet the needs of all electric vehicles available today and the advanced EVs soon entering the market, delivering energy up to 20 miles of range per minute to capable vehicles.

– Workplace/Multiunit Dwelling Level 2 Charging – Electrify America has worked with vendors to install more than 1,700 Level 2 charging ports at workplaces and multiunit dwellings across the state. Over 40% of these stations are located in low-income and disadvantaged communities.

– Energy Storage Sharing – Electrify America is proud to be the first official investor in the Energy StorageShares program run by the Sacramento Municipal Utility District, which incentivizes the placement of energy storage in grid-stressed locations in Sacramento.

– CAR SHARING – Electrify America has invested in ZEV car share services within the city of Sacramento which complement each other with different service areas while providing the same easy access.

– ZEV BUS/SHUTTLE SERVICES – Electrify America invested in a ZEV bus and an on-demand micro-shuttle service, both anticipated to begin offering service to local residents in April 2020. To support powering the fleets, Electrify America is installing charging stations with ultra-fast chargers.