13% market share of electrified vehicles in Europe in January 2020 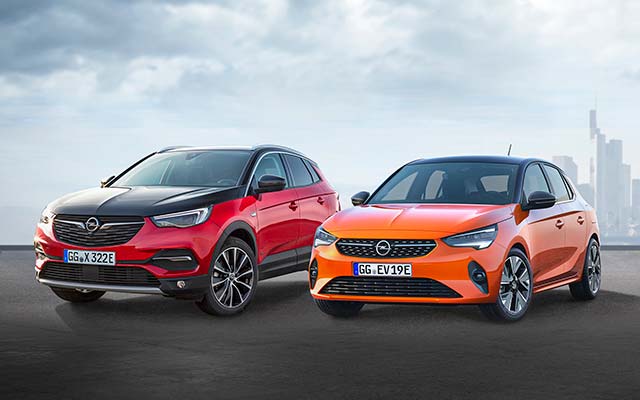 After a large increase of European registrations experienced in December 2019, volumes for January have decreased, marking another month of transition for the complex new car market. A total of 1,138,057 new passenger cars were registered in January 2020, representing a decline of 7.6% from January 2019. This steep reduction was in large part caused by the last minute purchases made in December, due to the impending introduction of the new CO2 emissions regulation.

Despite the decrease from December, registration levels were actually the 4th highest in January, for any year in the last decade. Felipe Munoz, global analyst at JATO Dynamics explained: “The European market is still showing signs of strength despite a tough environment. We believe that the market is capable of adapting to meet new regulations and impending challenges. This is exemplified by the increase of EV registrations, which was a lifeline for many OEMs in January. Only two years ago not many in the industry would have predicted such high levels of demand for EVs.”

In fact, electrified vehicles provided the only driver of growth for the market in January. They posted a record in volume and market share due to increasing incentives for consumers, greater awareness about the benefits of electrified vehicles, and the growing concern about diesel and petrol cars. During the first month of 2020, total EV sales increased by a huge 72%, jumping from 87,100 units posted in January 2019 to 150,100 units in the same month of 2020. This is a market share of 13.3% compared to just 7.1% in the year prior.

All EV types contributed to growth as Hybrids (HEV) increased their volume by 36%, pure electric (BEV) by 91% and plug-in hybrids (PHEV) by 173%. For the first time, the hybrids counted for less than half of total EV registrations. Munoz commented: “Europe demonstrated that the widespread adoption of EVs is increasingly feasible, and will become a likely reality once the cars become more affordable”. 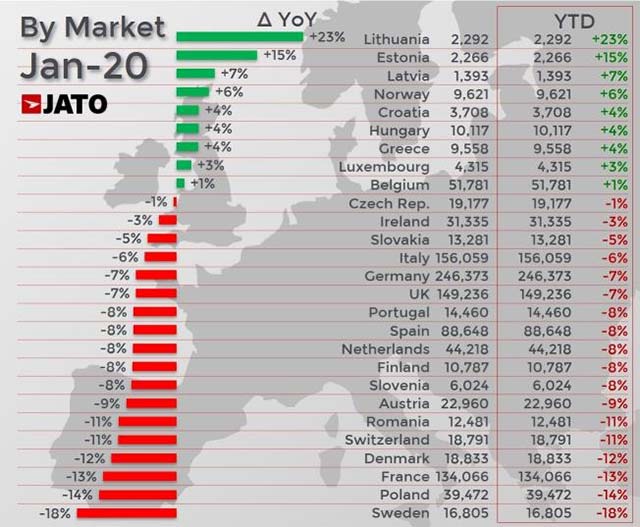 Meanwhile, despite a slight decrease in total registrations SUVs did manage to increase market share due to the drop in overall vehicle sales in January. Across Europe consumers bought 452,900 SUVs, down by only 1%, which allowed them to gain 2.6 points of share at 39.8% of total registrations. Only 14% of all SUV registrations in January were powered by electrified engines, whereas 28% of luxury sedans were HEV, PHEV or BEV. Munoz noted: “SUVs continue to gain traction. However, manufacturers need to produce more EV models if they want to keep up the momentum of growth moving forward”. 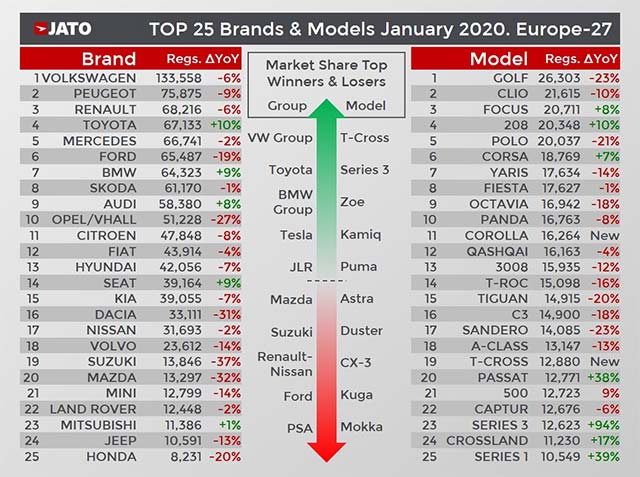