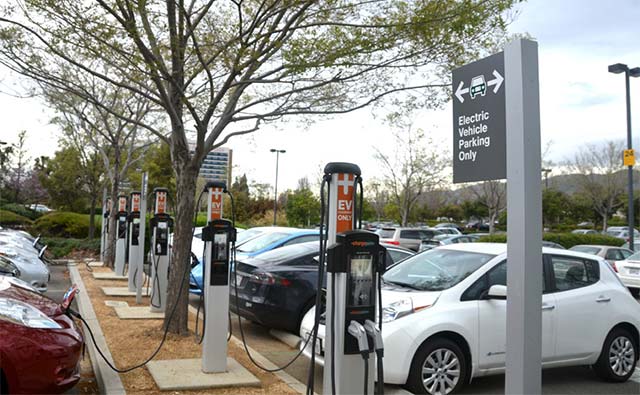 Yet, certain persistent myths prevent many drivers from committing to e-mobility. Shining a light through the fog of misinformation is often the best way to dispel it, so in the interest of facts, here are five of the most prevalent myths about EVs and today’s realities.

REALITY: This common myth wasn’t true in the early years of mass-market EVs, so it’s a wonder it still persists today. In 2011, the average range of an EV was 73 miles. By 2018, it had increased to 125 miles. Today’s battery electric vehicles (BEVs) routinely achieve 300 miles or more on a single charge. Additionally, most people charge at home and at work, which ensures cars are always charged and are generally starting a drive with ample capacity. Consider this: the average number of miles driven in the UK each day is just over six and a half. This misconception is, and always has been, a non-issue that needs to finally be laid to rest.

REALITY: While the purchase price for an EV has historically been higher than an equivalent internal combustion engine (ICE) automobile, that’s far from the whole story. It ignores generous Government and local grants and rebates, as well as far lower fuel and maintenance costs. A recent AAA study of American EV owners found that over 5 years and 50,000 miles, an older EV was only slightly more expensive to operate annually than a traditional car (around £461/annually). With around 60 BEV models available in the UK (including 33 new ones coming this year), chances are there’s an affordable option out there for most drivers.

REALITY: This one is based on outdated ideas about fuelling. Charging an EV is far more like powering up a mobile device than filling a car with petrol. In fact, most EV drivers plugin where they spend most of the time: at work or home. Considering the average car sits idle for 159 hours each week, forgetfulness is the only excuse most people have for running out of fuel. For those who need extra juice for long trips, charging points can be found throughout the UK. Rapid charging points are also growing in numbers, for example, InstaVolt has a network of rapid chargers throughout the UK.  In fact, there are already 16,000 public charging points and the Prime Minister has pledged an additional £500 million for thousands more, saying “No home in the country [will be] more than 30 miles (48km)” from a place to charge.

REALITY: EV performance itself doesn’t suffer in cold weather—in fact, from instant torque to digital traction controls, an EV will usually outperform a traditional car regardless of the season. What people are really talking about is the lithium-ion battery, which does require more energy to heat the cabin in extreme cold, thus sacrificing range (roughly 19%). It’s also true that EV batteries charge more slowly in cold temperatures. But, as with any new device, EV drivers quickly learn to compensate by using pre-timed heating systems to warm the vehicle while it’s charging, driving responsibly (as one should anyway) and keeping an eye on tire pressure, which can help recoup as much as 13% of lost range all by itself!

REALITY: This has been a favourite of the doom-and-gloom crowd since the early days of EVs. The naysayers lament, “Why bother driving an electric car when most electricity comes from coal anyway?” Of course, that kind of reasoning ignores the fact that doing something positive for the environment is better than doing nothing and that more EVs on the road mean less carbon in the atmosphere and less pollution overall. Now, it’s not even technically true either. According to National Grid, 2019 marked the point of no return for fossil fuels. Today, more energy comes from zero-carbon sources than at any time since the beginning of the industrial revolution. Take that, kill-joys.

To reiterate, “range anxiety” should remain the purview of the unusually anxious (in fact, many EV drivers report that they love starting each day with a “full tank”). When incentives and lower operating costs are considered, today’s EVs are comparably priced to their ICE counterparts. Fuelling an EV is as easy as plugging in a device and there are plenty of places to do so, with more charge points appearing daily. Here in the UK, where mild temperatures prevail most of the year, driving an EV during the winter is like driving any car—you take special precautions. Also, is it too soon to begin referring to renewable energy as simply “energy?” One more thing: that AAA study I mentioned earlier found that 96% of current U.S. EV drivers plan to purchase or lease another electric vehicle. I guess it’s true what they say, “Once you drive electric, you’ll never go back to gas.” Make sure to tell your friends.

André ten Bloemendal is VP of Commercial Sales Europe at ChargePoint, who have been committed to making it easy for businesses and drivers to go electric since 2007. From workplaces to fleet, residential to retail, ChargePoint is creating the new fueling network to move all people and goods on electricity. To date, ChargePoint’s network has grown to more than 108,000 places to charge with drivers plugging in approximately every two seconds while delivering more than 63.5 million charges. For more information, visit www.chargepoint.com