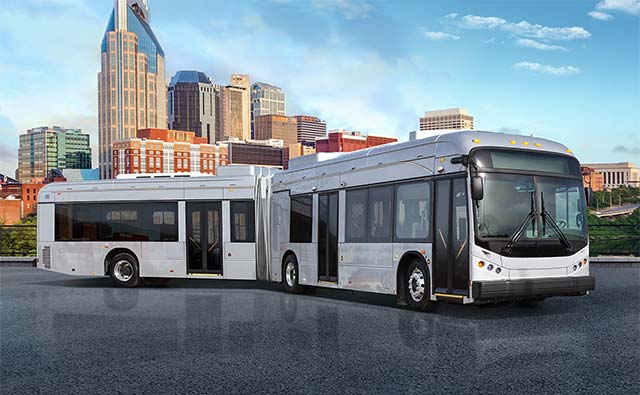 The K11M, which exceeds all Buy America requirements, became the first articulated bus to successfully complete the new FTA “Pass/Fail” protocol and is the only five-door model to do so.

As a result, U.S. transit agencies can use FTA funding to buy the BYD K11M. Several agencies, including the Antelope Valley Transit Authority, based in Lancaster, Calif., Los Angeles International Airport, Los Angeles County Metropolitan Transportation Authority, and IndyGo in Indianapolis, have already deployed the model.

“This is a milestone for battery-electric buses, and clearly highlights the style, innovation, and safety features that are hallmarks of the BYD brand,” said BYD North America President Stella Li. “Not only are these American-built buses safe, they are quiet and comfortable and contribute to better air quality and a higher standard of living in our communities.”

In September, BYD’s K11M became the first battery-electric transit bus of its size to complete the full 15,000-mile durability test in an impressive 106 days and requiring a minimum amount of maintenance, setting a high bar for all other bus manufacturers.

BYD’s 60-foot articulated transit bus is ideal for high-volume passenger operations, providing service with less noise and vibration. Depending on the configuration, the bus can accommodate up to 89 passengers. It has a range of up to 220 miles and can be fully charged in three to four hours.

The K11M is built at BYD’s Coach & Bus factory in Lancaster, Calif. All of BYD’s zero-emission buses not only meet but also exceed FTA Buy America requirements, incorporating more than 70% U.S. content.

BYD is the first battery-electric bus manufacturer that has both a unionized workforce and a Community Benefits Agreement, which sets goals for hiring veterans, single parents, second chance citizens, and others facing hurdles in obtaining manufacturing employment.

BYD offers the widest range of battery-electric bus and coach models in the United States, ranging from 23-foot motor coaches on up to the 60-foot K11M.

When it comes to zero-emission transportation, BYD brings innovation and cutting-edge technologies to forward-thinking communities and private enterprises.