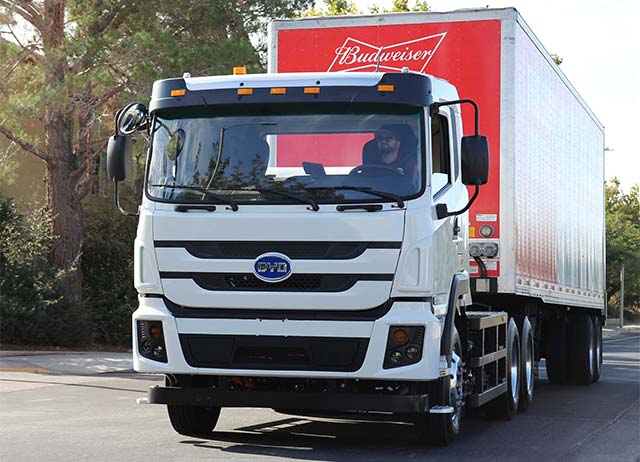 BYD announced it delivered its 100th battery-electric truck in the United States. Globally, BYD has delivered more than 12,000 zero-emission electric trucks across all classes.

“This is a great milestone for BYD, and it is just the beginning,” said Aaron Gillmore, BYD’s Vice President of Truck Business. “Our trucks are hard at work every day proving that electric is the new standard. 2020 will be a fantastic year for battery-electric trucks.”

The 100th truck will go to work delivering beverages for Anheuser-Busch around the San Francisco Bay area to retail accounts such as grocery and convenience stores on a daily basis. The trucks will charge at the Anheuser-Busch Oakland facility overnight. The project was grant funded by CARB.

Through its 2025 U.S. Sustainability Goals, Anheuser-Busch has committed to reducing carbon emissions by 25% across its entire value chain by 2025.The Oakland deployment builds on the brewer’s existing partnership with BYD including 21 additional BYD battery electric trucks at four of their distribution facilities across southern California: Sylmar, Riverside, Pomona, and Carson.

“We are proud to continue to build on our commitment to sustainable logistics through our partnership with BYD in California,” said Joaquin Schlottmann, Vice President of Tier 2 Logistics at Anheuser-Busch. “By integrating zero-emission vehicles into our distribution fleet, we are taking another step towards reaching our sustainability goals and helping ensure our beers are delivered in the most sustainable way possible.”

In a related news, BYD said that Long Beach Transit, a longstanding customer, will purchase an additional 14 K9M 40-foot, battery-electric transit buses for its fleet.

With this purchase, BYD has now sold more than 470 electric buses to customers in Southern California including airports, universities, private operators, and transit agencies.

Jan 13, 2020Blagojce Krivevski
NIO delivered 3,170 EVs in December, up 25.4%Researchers develop Li-S battery that could enable an EV to drive more than 1,000km on a single charge